The Apple Watch makes a terrific bedside clock and wake-up device. In this article, you’ll learn about the Apple Watch’s alarm feature, including the iOS 12 Bedtime mode, troubleshooting techniques, and more.

How to Set up Apple Watch Alarms

Ready to set the Watch to wake you up at a specific time? Let’s get started.

The alarm time will now show whenever your Apple Watch is in Night Stand mode.

A hassle-free way to set up the alarm on your Apple Watch is to use Siri. In doing so, you don’t have to open the Alarm app and set the alarms manually. Instead, ask Siri to “Wake me up at” or “Set Alarm for” and specify your time. You can also say “Set Repeating Alarm for 7 PM” to set up an alarm that repeats daily.

This action will set up the alarm on your Apple Watch. Similarly, you can also use Siri to remove all your alerts by saying “Clear All Alarms.”

You can change alarm times and whether you wish to repeat them from the main Alarm app screen.

When the snooze feature is active, you can turn off your alarm just by tapping Snooze on your Apple Watch display. In several minutes, the alarm will sound again. You can also push the Digital Crown to snooze the alarm.

What is NightStand Mode?

When you turn your Apple Watch on its side, and it’s connected to the charger, you’ll enter NightStand mode. During this time, you’ll see the time and date displayed, not the Apple Watch face.

If you are having issues with this function, go into your Apple Watch apps and select the Settings app. Select General > NightStand Mode and make sure it’s turned ON. If it isn’t, toggle it ON.

To see the same alarms on both iPhone and Apple Watch:

The Apple Watch will alert you when an alarm goes off so you can snooze or dismiss the alarm. You aren’t alerted on your iPhone when your Apple Watch alarms go off. 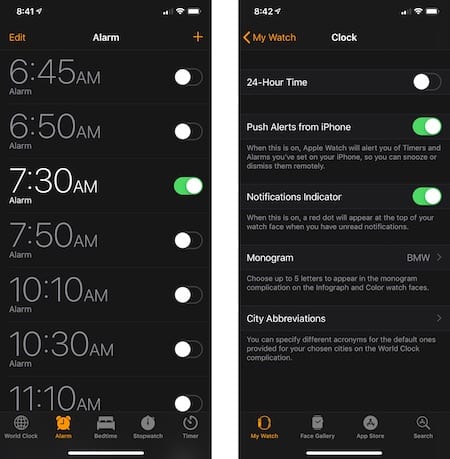 Apple Watch Alarms not working, Here are some tips

The best way to address alarm problems on your Apple Watch is to restart both the wearable device and your iPhone. Be sure to restart the iPhone before the Apple Watch.

You can also toggle the Silent Mode ON and OFF a few times to see if that resolves the issue. When Silent Mode is enabled on Apple Watch, both alarms and timers are muted unless the wearable device is on the charger and connected to power. Use your finger to scroll up from the bottom of your Apple Watch to see the Control Panel. A bell icon represents silent Mode.

Apple Watch Alarms not working after updating to iOS 13

Several users have reported that their Apple Watch alarm notifications are not working following updating their iPhone to iOS 13. Apple watch doesn’t ring for the alarms that have been set up on the iPhone.

Here is one setting that you should definitely check and make sure if you are having this issue. 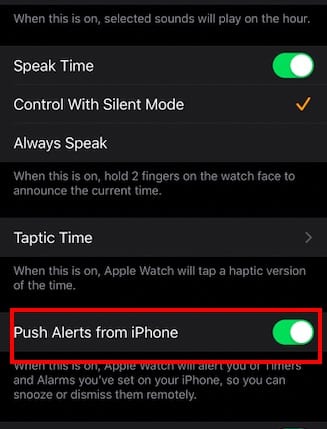 This setting helps the Apple Watch to alert you on the timers and alarms that you have setup on your iPhone.

No Vibrations During Alarms

One of the issues you may experience with your Apple Watch alarm has to do with the device’s haptic mode. When active, this mode allows your wearable device to vibrate during alarms.

To check whether this feature is in the ON position:

Scroll down and select the Prominent setting.  In doing so, you’ll receive an additional haptic tap to pre-announce alerts.

Alarms Set via Hey Siri Not working on Apple Watch

This is one of those random problems that can occur without reason or rationale. Try setting up an alarm on your Apple Watch by saying ‘ Hey Siri set an alarm for 6 am called yoga time’. If your hey Siri has been set up on your Apple Watch, you should see the response ‘OK I’ve set your alarm..’ which is how it should behave. 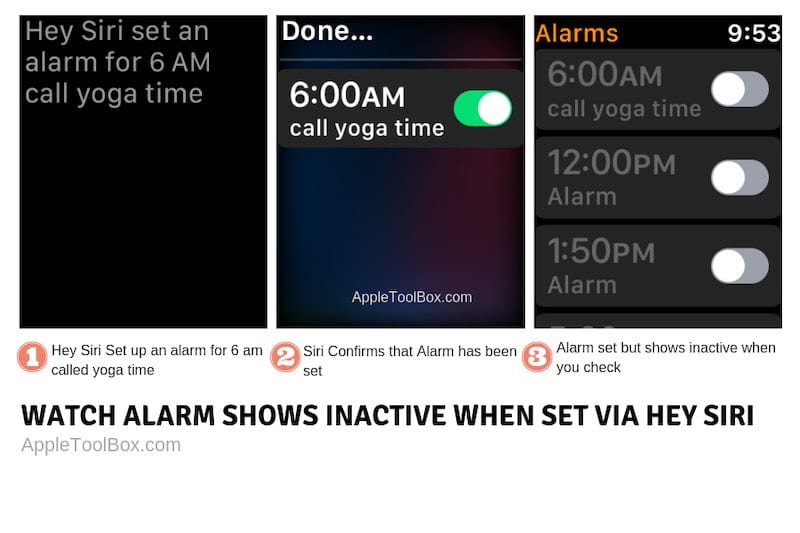 The problem is that it shows you the right message but sometimes the Alarm is simply inactive. You can check all your alarms on the watch and you may see this.

Many users have reported this issue. There isn’t a straight cut solution to this issue. The only advice that we received from Apple Support was to unpair/re-pair your Apple Watch and see if this issue goes away.

What we have found is that sometimes the Hey Siri works better when it is reset on your Apple Watch. This is just not for the alarm function but also for other functions that require invoking ‘Hey Siri’ on your watch.

Now check if you are still having issues with setting up alarms via the ‘Hey Siri’ function.

Alarms not going off on Apple Watch or iPhone

Have you ever been in a situation when you know that the alarm is set up and is active on your iPhone and Watch but it never turns on at the set time.

You have gone over the various settings such as volume control, mute, do-not-disturb et al as described in the earlier sections but still have the issue.

One workaround that seems to be working for many users is to first delete all your alarms from your Apple Watch and iPhone.

Use ‘Hey Siri delete all my alarms’ and confirm when you see the message. 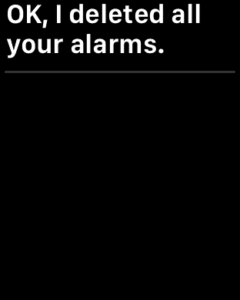 Set up your alarms again but this time also add in a proxy. By that we mean if you have an alarm set for 7 am. Set another alarm for 7:01 am. When the time interval between two alarms is close, it appears that your iPhone or Watch somehow triggers the alarms.

Again, this is not the best solution by any means but the workaround seems to be working for some users.

Tip for Deep Sleepers – If you sleep deep, sometimes you may miss the alarms. The alarms have a specific time limit on the Apple Watch. If you are looking for an app that requires you to take an action before the alarm turns off, check out Alarmy and see if that helps your issue.

Here are some frequently asked questions about alarms on Apple Watch and the answers.

How Long Does the Watch Alarm Last?

Your alarm will continue to ring on your Apple Watch until you turn it off or hit the Snooze button.

Does the Apple Watch Alarm Make Sound or Just Vibrate?

This depends on your setting. By default, you’ll hear a sound and a feel a vibration each time the alarm goes off. However, when turning on Silent mode, you’ll only feel the vibration.

To turn on Silent mode, scroll up from the Apple Watch face. Tap the bell icon representing the setting.

Does the Watch Alarm Work Without an iPhone?

Yes, you don’t need to have your iPhone with you for the alarm to work on your Apple Watch.

How Do You Make the Apple Watch Alarm Sound Louder?

To make the sound of your alarm louder (or softer), go into the Settings app on your Watch. Tap Sounds & Haptics and change the Alert Volume up or down.

What About Bedtime Mode?

If you’re using Bedtime mode on your iPhone, the alarm is also reflected on Apple Watch, assuming your wearable device is unlocked.

If you run into a problem with the alarms on your Apple Watch, your best bet is to first reboot your wearable device and iPhone. From there, follow the troubleshoot techniques mentioned here.