You are here: Home / How-to / How to Download iOS Updates Over 5G With the iPhone 12

This is just one of the key benefits of being able to utilize the faster network speeds provided by having a 5G-enabled device. While T-Mobile and AT&T have already been rolling out their nationwide 5G bands, Verizon is now joining in on the fun with the iPhone 12 launch.

Out of all of the new features of the iPhone 12, there was one that Apple continued to drive the point home – 5G. All four models of the iPhone 12 are equipped with 5G network connectivity. But what is 5G, and does it really matter at this point?

Ever since the iPhone 5, your iPhone has taken advantage of the 4G LTE network speeds provided by your carrier. This has been more than adequate and still is. However, it was only a matter of time before the “next generation” of network speeds would be introduced.

Before diving into those speeds, it’s important to note that not every version of 5G is the same. For example, T-Mobile’s 5G network makes use of the low-band, or Sub-6Ghz, frequencies. This offers more widespread coverage and is the foundation of most 5G networks. The problem arises when you start digging into the actual speeds of the low-band 5G. Whereas 4G LTE can see speeds topping out around 50Mbps, Sub-6GHz speeds sports maximum speeds of 200Mb/s. 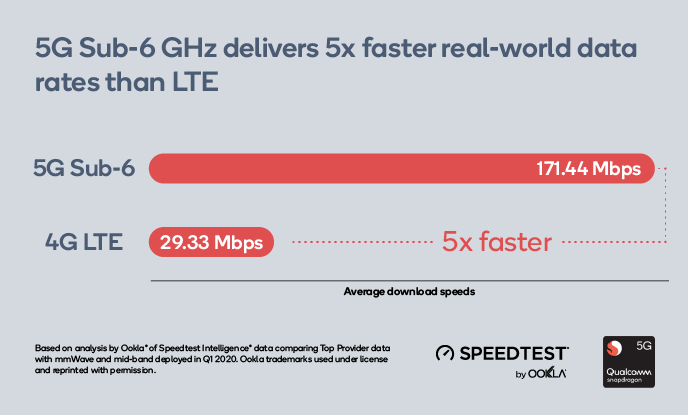 There is another version of 5G which is starting to roll out now, and that’s known as millimeter-wave or mmWave. As evidenced by the iPhone launch event, this is what Verizon’s 5G network is based upon. As for speeds, you’re looking at maximum speeds of up to 1.8 Gbps, but for a price. See, mmWave is very “finicky” as you could lose connectivity to those speeds if you turn a corner or if the wind is blowing too hard. Let alone the fact that it’s not accessible from the indoors.

So do you really need 5G? Not really. This is the wave of the future and both Sub-6Hz and mmWave will continue to improve. However, for the time being, the standard 4G LTE connections will do just fine.

How to download iOS updates over 5G with iPhone 12

It’s not unlike Apple to try and jump on a new movement, provided that all of the details have been fleshed out. Apple believes that 5G is the way of the future and since not everyone upgrades their iPhones on a yearly basis, it’s the perfect opportunity to future-proof their customers.

One limitation for those on iPhone’s before the iPhone 12 comes in the form of software updates. Previously, the only way you could download and install an update was to be connected to a Wi-Fi network. Considering just how much faster 5G speeds are than most Wi-Fi networks, this opens the door to allow users to use the fastest network possible.

With the iPhone 12 and a 5G connection, you no longer have to wait until you can find a Wi-Fi connection in order to download a software update. Here’s how you can download iOS updates over 5G.

One thing to be weary of is the amount of data being used by downloading these software updates through your cellular network. If you happen to be on a plan with a “data cap”, chances are, you will end up hitting the cap much sooner than you would normally.