In the watchOS 5.1.1 update, there’s a nasty Apple Watch email bug that’s affecting a limited number of users. For those affected, it’s not possible to find or read emails through the wearable device. Email Notifications go missing on Apple Watch. No doubt, Apple will fix this problem with a future watchOS update. Until then, there’s a workaround you can use to resolve the issue.

A small number of Apple Watch users see the message “No Mail Account. Setup a new account on your iPhone” when accessing the Email app. Users are unable to access any email notifications on the Apple Watch.

Before starting the workaround shown below to bring emails back to Apple Watch, try these two possible solutions first.

You can also consider restarting both your iPhone and Apple Watch at the same time. After both devices reboot, see if emails once again work on Apple Watch.

Before the introduction of a watchOS update that squashes this annoy bug, use the following workaround for resolution. This fix creates a custom notification for emails.

To do so, first follow these steps on iPhone: 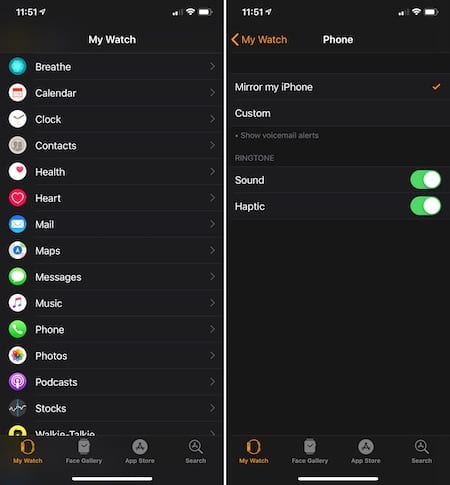 This workaround should resolve the email issue on your Apple Watch until an official bug fix is released.

If you’d like to ditch the official Email app for Apple Watch (and iPhone), there are two third-party solutions worth considering: AirMail and Microsoft Outlook. Both solutions have been available for Apple Watch since right after the wearable device first launched in 2015.

Microsoft’s email application has long been a popular choice for iPhone owners. The Apple Watch version of the app offers your inboxes and upcoming calendar appointments. You can also respond to an email with ease using voice dictation or with a canned response. For your wrist, you can delete or archive emails, flag them as important, and much more. Like the Airmail app, Microsoft Outlook for Apple Watch includes complications.

Hopefully one of these solutions will fix your email problem on Apple Watch. Let us know below which solution you used to get your emails again.