You are here: Home / Mac / How to Automatically Eject External Drives from Mac

We’ve all been there before. You’re in a rush, so you disconnect your MacBook from its docking station, only to forget that you didn’t actually eject the attached hard drive or SD card. When you return to the Mac later on, you’re presented with an annoying little pop-up message that says “Disk Not Ejected Properly. Eject “DRIVE NAME” before disconnecting or turning it off.”. Sometimes this happens even when your Mac just goes to sleep, and you haven’t been able to figure out a way how to automatically eject external drives from Mac.

How to Automatically Eject External Drives From Mac

There’s a good reason why Apple shows that little message every time an external drive is just “yanked” from your Mac. It harkens back to the days of floppy disks and CD’s where you had to physically remove them from your Mac. Even with fast SSD’s and external storage solutions, there’s still a potential for damaging the drive itself, and losing all of the stored data in the process.

The traditional method to eject external drives from Mac is to simply right-click the drive image on your desktop, and select Eject from the drop-down menu. Or, you could fire up the Finder app on your Mac and press the Eject button that appears next to the drive. However, none of these solve the problem of being able to automatically eject external drives from Mac. Luckily, there are a few great options out there for you to experiment with to see what works, or what doesn’t. 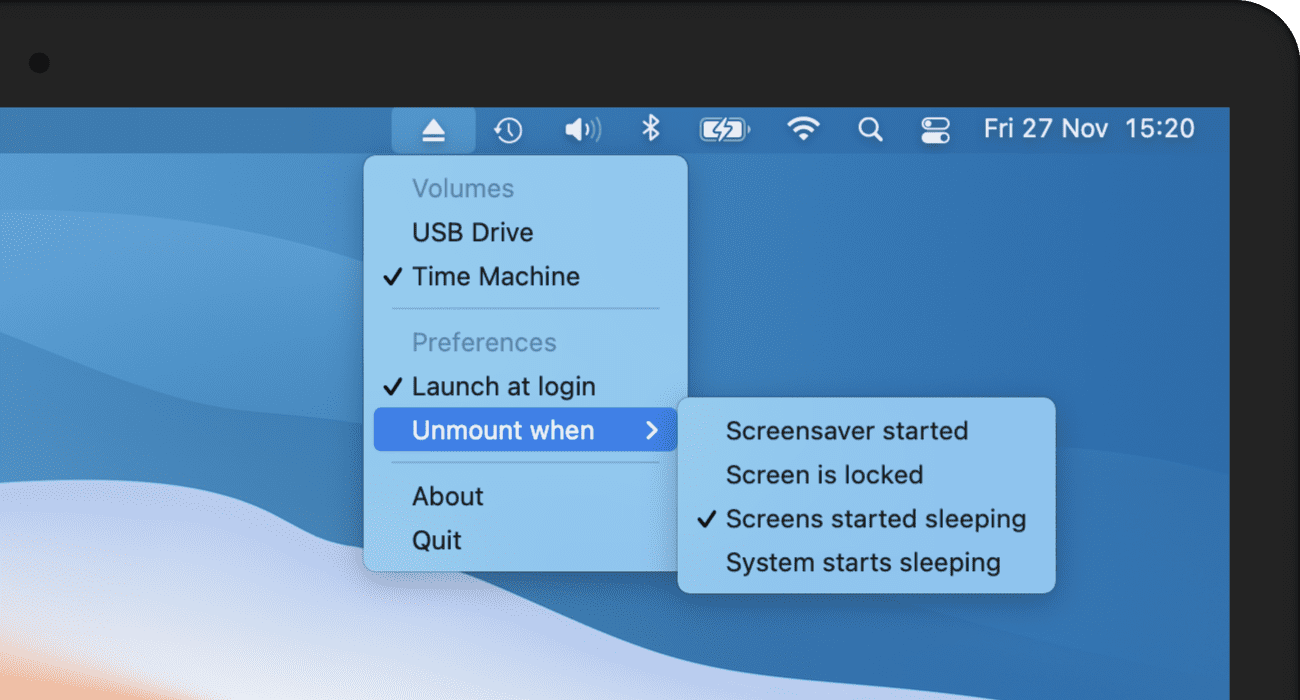 Ejectify is the first app on the list, and for no reason other than it was the first one in my notes. As with the other apps you can use to automatically eject external drives from Mac, Ejectify makes it easier than ever to avoid the annoying pop-up notification that appears. The app offers a bunch of flexibility, as you are provided with the following configurations:

You can purchase Ejectify directly from the developer for just $3. Or, you can compile the app from the source code found on Github for free.

Unlike Ejectify, Jettison has been around on the Mac for quite awhile. Despite still being compatible with macOS 10.9 Mavericks, the developers are on-top of the ever-changing macOS landscape. If you’re a proud owner of an Apple Silicon-powered Mac, you’ll be happy to know that Jettison also supports the new architecture natively. As for how it works, whenever your Mac goes to sleep, Jettison will automatically eject any external disks. Then, it will remount any connected disks when you wake your Mac again.

The app is free to download and includes a 15-day free trial. After that, you can purchase a single license for $4.95, or multiple licenses starting at $3.95 per license. 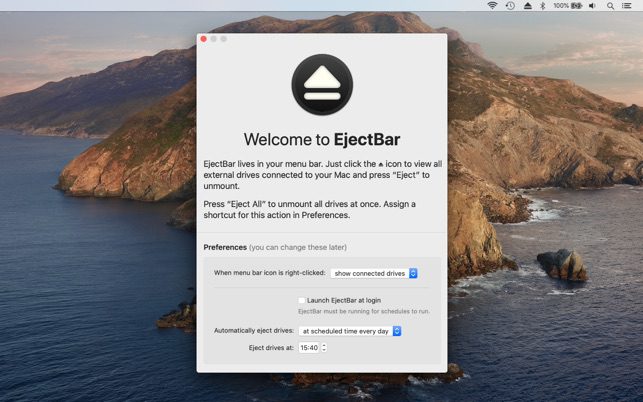 You might not have heard of EjectBar before, but if you’re entrenched in the Apple ecosystem, you’ve likely heard of its developer, Benjamin Mayo. In addition to being an app developer, Benjamin also moonlights as a blogger, writing for his own personal blog, along with covering Apple news for 9to5Mac. With EjectBar, this simple application is only accessible from your Menu Bar, and makes it easy to unmount all of your external (or connected) drives at the same time. EjectBar also supports the option to assign a keyboard shortcut to eject your drives, and can even be set up to automatically eject drives at scheduled times.

EjectBar is available from the Mac App Store for a one-time purchase of $1.99.

When it comes to replacement apps for Spotlight, Alfred has reigned supreme for years. But there’s another app, known as Raycast, that was released back in 2020 which has garnered a lot of hype and excitement. Both of these apps do a fantastic job at replacing Spotlight along with supercharging the quick action experience. And regardless of whether you use Alfred or Raycast, you can automatically eject external drives from Mac right from the interface. 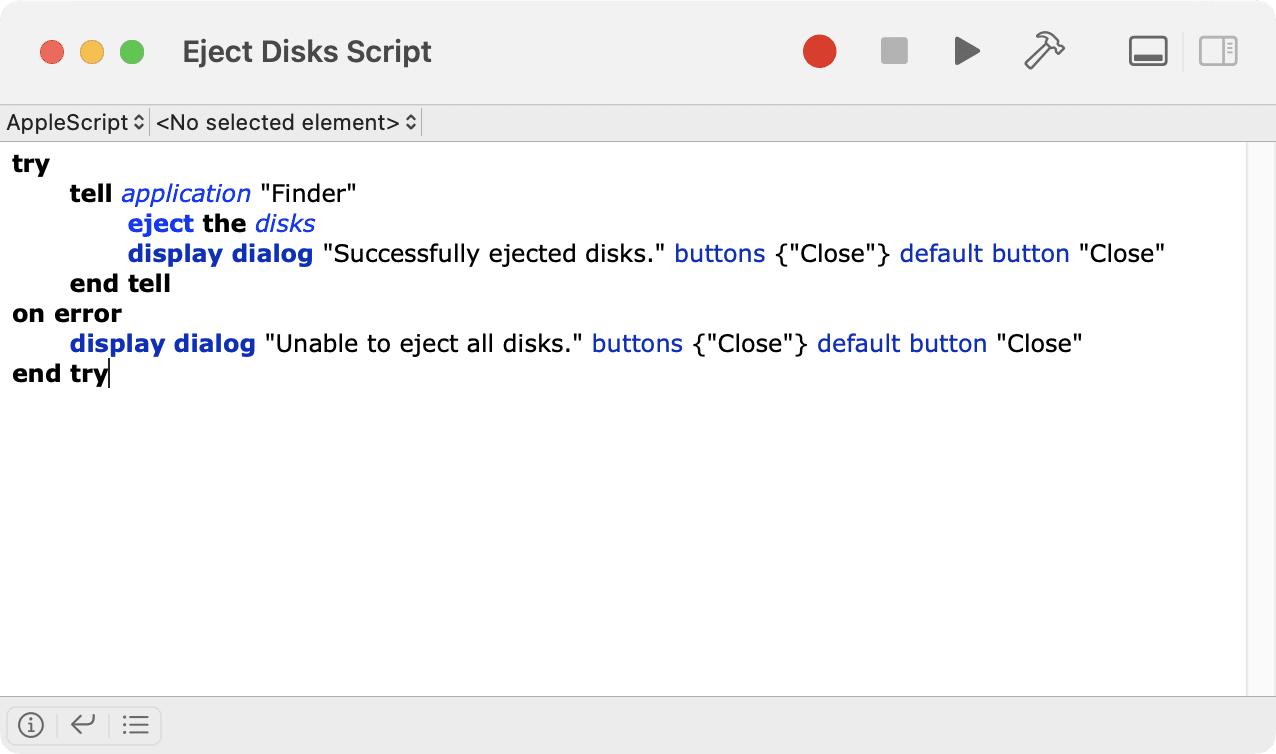 The last option on this list was one that I hadn’t really thought about, and then it sent me down a rabbit hole before I had to resurface. David Sparks, aka MacSparky, has been one of the biggest proponents of Keyboard Maestro over the years, so it should come as little surprise that he created a Macro for ejecting external disks. But instead of just trying to build a complicated macro, MacSparky also went so far as to create an AppleScript that works in tandem with the Keyboard Maestro Macro. If you’re interested in using this yourself, you can download the script from the link below.