You are here: Home / Reviews / Charge Everything With the Nomad Base Station Apple Watch Edition

Back in 2017, Apple announced that the company was working on a new wireless charging pad that could charge your iPhone, Apple Watch and AirPods at the same time. This is something that Apple fans had been hoping for, as the third-party solutions were sketchy at best, for the most part.

Fast forward to March 2019, and Apple had to finally pull the plug. There were a myriad of issues Apple was trying to combat, including heat management, interference issues, anymore. This opened the door for more third-party accessory makers to step up to the plate and fill the void. While there are many different options that can do the job nowadays, none of them quite hold up compared to what the Nomad Base Station provides.

Nomad is a company that got its start on Kickstarter, all the way back in 2012, with the Nomad ChargeCard. This product was slim enough to fit in your wallet, while offering a USB-A plug for the wall or your laptop, and the other end plugged into your iPhone. There was even a microUSB version for those Android users who wanted in on the fun.

Over the years, Nomad has expanded its business to focus more on quality products made with leather and kevlar. The company now has plenty of great leather cases, charging solutions, and even a unique wireless charger for Tesla Model 3 owners. Plus, Nomad expanded into the EDC realm, but offering accessories like Wallets, Keychains, Mousepads, and more.

Chances are that you’ve either seen or used a Nomad product over the last few years, as some of the company’s products have made their way into big-box stores. On countless occasions, I have meandered into my local Best Buy and will see Nomad wireless chargers or Apple Watch bands displayed prominently with other Apple accessories.

After taking it out of the box and plugging it in, you’ll see the charging pad itself is covered in a black Horween leather that is soft to the touch. This adds to the elegance of the charger, along with keeping with Nomad’s overall design aesthetic. On the back, you’ll find the Apple Watch charger built right in. You won’t need to worry about routing your existing charging cable into the Base Station, unlike other all-in-one charging stations.

On the front lip of the Base Station are three LEDs that will light up to let you know if various devices are being charged. But there’s also an ambient light sensor so that the LEDs aren’t too bright if you use the Base Station on your nightstand. Which is actually great, because if you’re charging your Apple Watch, you can use Nightstand Mode so you don’t want to end up with too many lights when you’re trying to get some sleep.

Moving to the back of the Base Station, power adapter input, along with a USB-C and USB-A charging port. While the standard USB-A port offers limited speeds up to 7.5W, there’s an added benefit of the USB-C port. This charging port offers Power Delivery at 18W, which can be used with a compatible cable to fast-charge your various devices. For example, you’ll be able to use this port to charge your iPad Pro 11 from 0-100% in less than 3 hours. 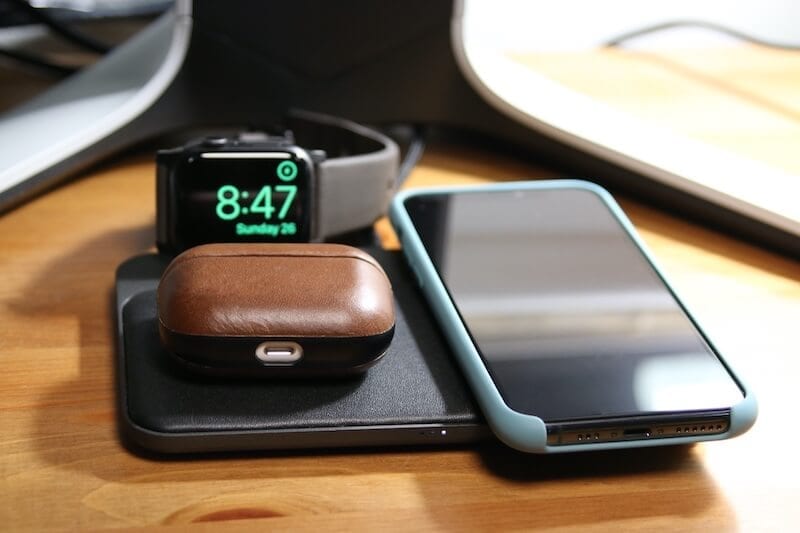 As someone who has a myriad of devices at my disposal, having a multi-charging solution is absolutely amazing. Pair that with Nomad’s minimal design aesthetic, and you really have a home run. I LOVE that I don’t need to try and route my own Apple Watch charger into the stand on the back. Plus, there’s even a little rubber pad on the platform that your Apple Watch rests on.

This pad helps to ensure that you can use the Base Station with any Apple Watch version. It doesn’t matter if you are still rocking a Series 0 or the latest and greatest, Nomad’s solution will work with them all. That attention to detail is part of why we love what Nomad is doing with its lineup of accessories. 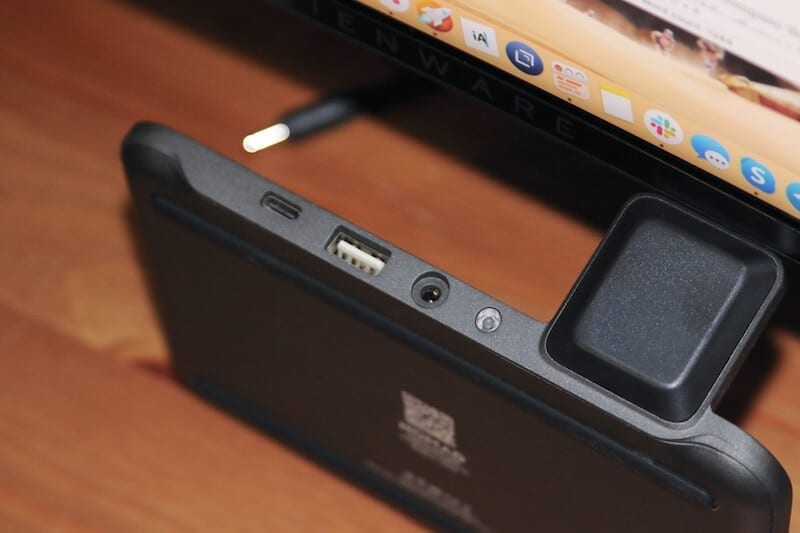 Another great aspect of the Base Station are the two charging ports on the back. My girlfriend is entrenched in the Samsung ecosystem and has a Galaxy Watch Active2, with a short charging cable. Being able to plug her cable in to the back of Nomad’s Base Station is extremely convenient and keeps her happy.

But what’s even more exciting is that the USB-C port not only offers 18W speeds, but with Power Delivery, you can use the Base Station to charge your iPad. This really creates an all-in-one solution for all of your accessories. There have even been times where I’ve plugged in a cable to charge up my Magic Trackpad or keyboard.

There’s a lot to like about the Nomad Base Station, but there was one frustrating aspect of using this charging solution. When trying to take advantage of the multiple charging coils, with both the AirPods Pro and iPhone 11 Pro on the pad, trying to position the devices correctly was a bit frustrating. 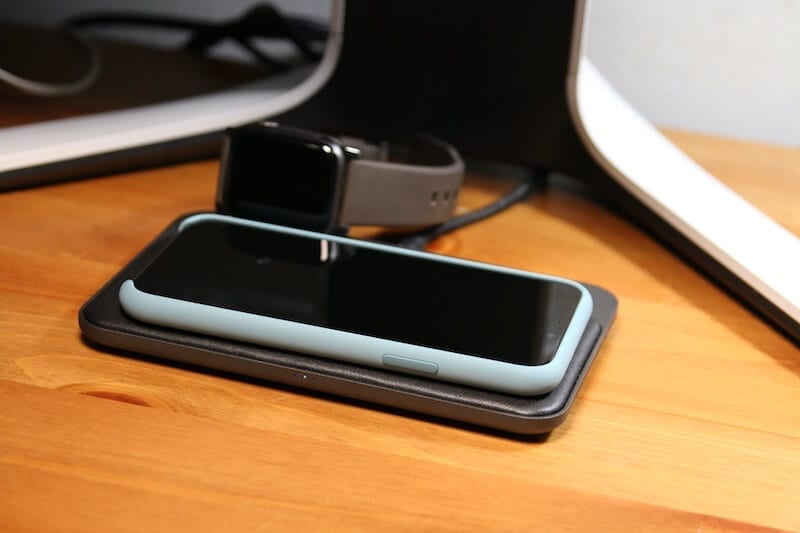 At certain points, I would put the iPhone on the Base Station for a little while, only to grab it later and see that the battery level never changed. The same would happen with my Pixel 4, but Google has actually integrated a notification letting you know to re-position the phone. Google’s Pixel 4 can recognize that a wireless charger coil is nearby, but just far enough away to not actually offer charging.

This part is something we’d like to see from Apple, but it probably won’t be coming until Apple releases its own wireless charging solution. It’s really frustrating to slap your iPhone down on a charging pad without double checking the LEDs, only to pick it up later and have a dead phone.

Should you buy the Nomad Base Station Apple Watch Edition 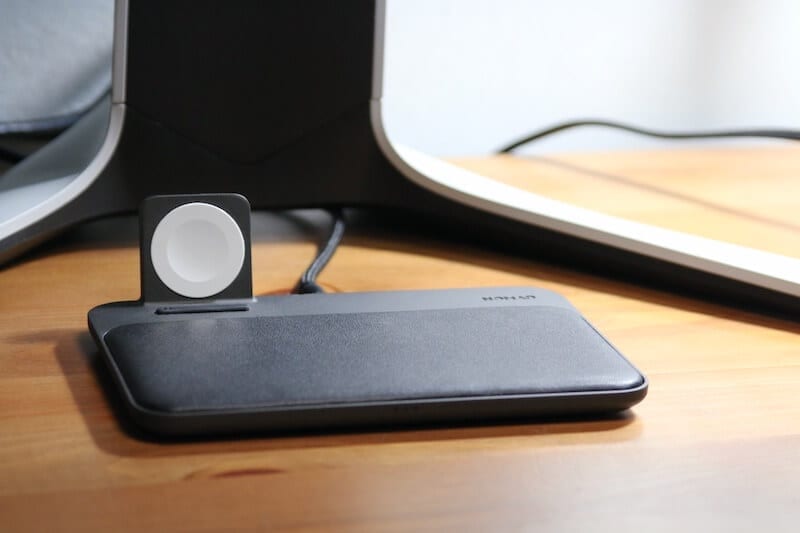 One common phrase used when describing Apple products are that they “just work”. Well, since we don’t have AirPower, Nomad stepped up and made an all-in-one solution that picks up the baton and takes it further.

If you own multiple devices, including the Apple Watch, we recommend picking up the Nomad Base Station. It’s really great, looks even better, and has added functionality to provide your charging station needs.

Let us know what you think about the Base Station and if you’ll be getting one!