You are here: Home / Apple Watch / How to Stop Apple Watch-iPhone Mirroring for Do Not Disturb, Airplane Mode

You’ve probably noticed that when you switch your iPhone into Airplane Mode, your Apple Watch will follow suit.

This works the other way around, too. And it also applies to the Do Not Disturb feature. While it’s a convenient and time-saving feature, it may not be appropriate in every circumstance.

You might not need or want both devices in Do Not Disturb mode. You may want your Apple Watch alerts turned off but your iPhone ringer on, or vice versa.

Similarly, you might just prefer to manually enable Airplane Mode on both of your devices before a flight. (Though, either way, you’ll need to manually disable them after a flight. But more on that later.)

Here’s how to disable the feature — plus a few additional considerations.

How to Turn Off iPhone Mirroring for Apple Watch

There’s no setting to disable iPhone-Apple Watch mirroring directly on your wearable. As such, you’ll need your iPhone to disable the feature. 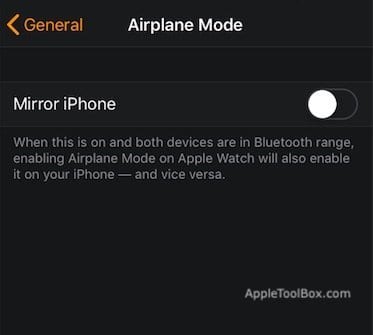 Steps to Turn off Mirroring

Of course, if you ever want to enable iPhone-Apple Watch mirroring again, just follow the above steps and hit the toggles so they’re green.

As you can see, disabling the iPhone-Apple Watch mirroring is fairly easy to do. But there are a couple more things to keep in mind.

Workout Do Not Disturb

Even if you opt to turn off Do Not Disturb mirroring, there is another toggle in the Watch app that may be of interest.

Basically, when you enter a workout, the feature will automatically turn your Apple Watch and iPhone to Do Not Disturb mode.

Just another feature to consider.

When iPhone mirroring is enabled, turning on Do Not Disturb will activate the feature on both devices. In the same vein, disabling it on either device will subsequently disable it on both.

It’s worth noting that this isn’t the case for Airplane Mode.

When you turn on Airplane Mode, it’ll activate it on both devices. But disabling Airplane Mode cannot be mirrored between your two devices.

In other words, to turn off Airplane Mode, you’ll need to manually disable it on both devices.

That’s largely because turning on Airplane Mode will disable a device’s radios. That means that either device won’t be able to receive a signal to disable the feature.

This is expected behavior and not a bug. But it is something to be aware of when you’re traveling so you can re-enable features accordingly.

Generally speaking, Apple Watch devices get their time information from the iPhone they are connected with.

When there’s an issue with that time zone information, it can obviously present a problem.

In iOS 11, there’s a widespread bug related to iPhones and time zones. Instances of the bug vary, but basically, it can cause serious issues when traveling — like missed flights or alarms because of an inaccurate time.

Putting the iPhone into Airplane Mode seems to trigger this time zone issue. Presumably, that inaccurate time data gets transferred to an Apple Watch.

Sure, you can’t really avoid putting your devices into Airplane Mode. But this is something to be aware of when you’re traveling.

We don’t have a confirmed fix as of yet, but there is something you can try — putting your Apple Watch into Airplane Mode before your iPhone (if mirroring is disabled).

Otherwise, just make sure to double-check that the times on both of your devices are accurate when you get to your destination.