You are here: Home / How-to / How to stop your iPhone from being updated to newer iOS

Seeing a message on your lock screen or notification center that a software update will be auto installed later tonight? Wondering how to prevent your iPhone, iPad, or iPod touch from automatically applying that update?

With iOS 12+ and iPadOS, Apple added an option to your device’s setting to perform any iOS or iPadOS updates automatically. This feature, called Automatic Updates, is on by default and means that when a new version of iOS or iPadOS releases, Apple upgrades your device automatically–usually overnight when connected to power and WiFi.

So why would you avoid installing the latest and greatest iOS or your iPad to the newest version of iPadOS?

While this auto-update feature is convenient, you may not want it on by default. There are a lot of reasons why you may not want to download and install the latest version of iOS and iPadOS. From worries about performance, using an older model, to the amount of storage iOS now takes up in the device’s storage–these are good reasons not to update your iPhone–especially just after a release.

One of the biggest reasons may be that Apple doesn’t make it easy to downgrade your device to an earlier iOS version.

So if you update to the new iOS/iPadOS version and discover that your (maybe older model) device is no longer working well–it’s virtually impossible to go back!

Follow these quick tips to prevent your iPhones, iPads, or iPods from automatically updating

This article is primarily for users who want to continue using the previous iOS version for their iPhone 6S and other older devices–even if they are listed on Apple’s compatibility for the latest iOS.

The critical step is to remove the iOS software update prompts on your device, so you can happily continue using your iPhone “as-is.”

Why You May Not Want to Download the latest iOS

As we alluded to, there are a variety of reasons why you’d want to stay on older software. That’s despite the fact that our usual advice is to update whenever you can.

For one, while Apple continues to support older devices with its new software updates, they can still cause sluggishness on those aging iPhone. That includes devices like the iPhone SE or iPhone 6s.

While Apple almost always makes a point of saying the latest update focuses on optimization and performance for all supported devices, experience proves that the older model devices often struggle with the new iOS version.

In particular, Apple specifically tailored iOS 12 to speed up older devices, meaning it’s a great option to leave on your older model iPhone–like the 6S and even the 7/8. That’s especially true for folks with the smaller 16GB or 32 GB phones.

Unfortunately, if your iPhone is eligible for an update, Apple consistently bugs you with software update prompts when you aren’t on the latest version!

Worse still, it’s pretty easy to accidentally have the latest iOS version installed on your device if you aren’t paying attention.

For the rest of this article, we’ll focus on how to avoid that.

And what to do if your device managed to inadvertently install the latest iOS.

How to stop iOS or iPadOS auto-downloading software updates

One of the simplest ways to stop iOS update prompts consists of two parts. First, you’ll want to disable automatic updates. You can do that by going to Settings —> General —> Software Update.

And make sure Automatic Updates is set to Off. 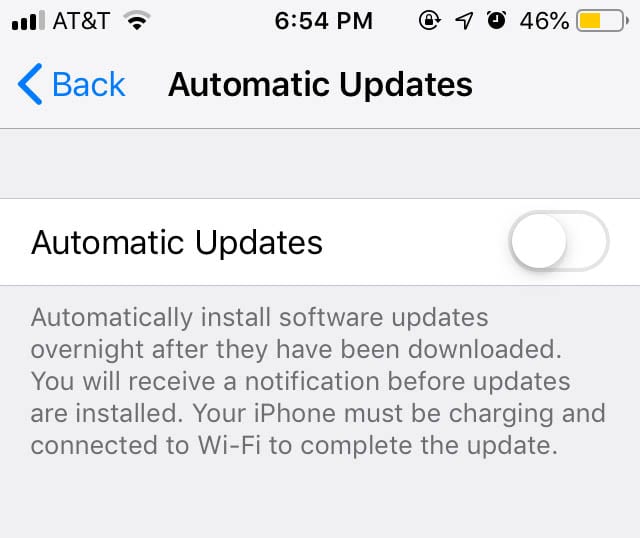 One simple trick that may work: download a beta profile

The next thing to do is to install a tvOS beta profile onto your device. This is an old trick that’s been around for a while. But, as of the writing of this article, it still works.

The simplest and safest way to get a tvOS beta profile onto your iOS device is to download one from Apple itself. Unfortunately, Apple has closed the loophole allowing public beta testers to download tvOS beta profiles onto non-tvOS devices. But if you have an Apple Developer account, it should still work!

That’s why you need to either sign up for an Apple developer account, or you’ll need to download a tvOS beta profile from a third-party source.

Since an Apple developer account costs $99 a year, it’s likely not feasible for most consumers. In that case, we’ll rely on the third-party profile distributor.

There is always a level of risk when it comes to downloading configuration profile from third-party sources. These sources could easily install malware onto your device instead of an actual beta profile.

With that being said, BetaProfiles’s site has long been a reputable source for Apple beta profiles.

As long as you’re downloading the tvOS beta from your own device, you should be okay.

Just confirm that the profile is signed and verified by Apple.

Installing a tvOS profile on your iOS device 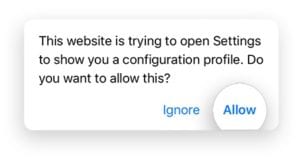 As an additional step, it’s recommended that you delete the actual tvOS software update from your iOS device. You can do that in Settings —> General —> iPhone Storage or iPad Storage.

Can you downgrade from the current iOS to an earlier iOS?

But what if your device is already somehow running the latest iOS? Is there an easy way to downgrade?

In a short answer: no.

That’s why we recommend trying to stop an iOS update before it happens (prevention rather than cure).

If you’re reading this after Apple released the major iOS to the public, most downgrade methods that worked during the beta cycle won’t.

If you try to downgrade, an iTunes or Finder Restore simply attempts to download the latest iOS or iPadOS version suitable for your device.

Of course, you can always try to find an IPSW restore image for iOS. We purposefully refrain from linking to any specific sites here, but a simple Google search will help you out here.

Apple usually stops signing these IPSW images shortly after an iOS version (major or minor) debuts. The chances of success after that window are pretty slim.

There’s also the problem of your data

While current iOS backups are backward compatible with the earlier iOS, the reverse is not true.

So if you didn’t create a full archived backup of your device before it was updated to the latest iOS, you cannot downgrade without losing your data. 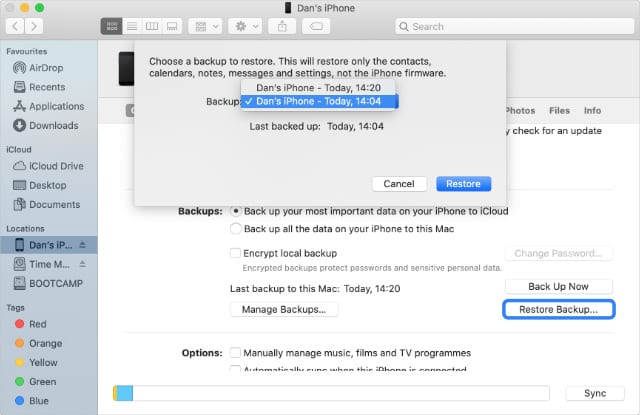 And even if you did create an archived backup, you still lose any data created after the date of that last backup.

Because of that, the best course of action is to simply stay on whatever iOS version your device runs.