There’s been a lot of talk surrounding iPhones, with Apple’s “Far Out” gathering people in the millions to check out the company’s latest product announcements. There was a lot of discussion surrounding the iPhone 14, the new Apple Watch series, and iOS 16. Apple has had a rocky history with allowing customers to repair their iOS devices, and there have been many lawsuits against the company’s efforts to discourage customers from doing so. However, what went completely unannounced during Apple’s “Far Out” event is that the company listened to customer feedback and decided to completely rearrange the internal construction of the iPhone 14 to allow for more repairability. Read more about this insane hidden update below.

Strangely enough, Apple only applied this internal redesign to the iPhone 14 and not the Pro or Max versions. Perhaps they’re undergoing a practical testing period to evaluate the efficacy of these changes. The main difference between previous iterations of the iPhone and the latest one is that the iPhone 14 opens from the front and the back. Apple’s gone back to the drawing board to brainstorm a complete remake of the iPhone’s construction, as it has a metal midframe and removable front and rear screens.

What does that mean?

With just two screws, you can open up the back of the iPhone. Remove another two screws, and you can access the screen as well. That means that any engineers or repair experts can take apart your iPhone 14 with ease, unlike previous iterations of the product. If you have a faulty battery, weak cellular connections, or any other problem, you have a much better chance of getting it fixed now. All that is to say that you’ll be saving a lot more money. 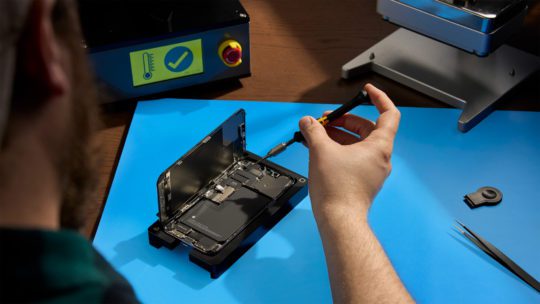 Previous iPhone constructions have been notoriously hard to fix due to the back glass and how powerful the adhesive gluing everything together is. In theory, if you could get through to all the internal components, then the hard part was over. However, many third-party repair shops would simply refuse to even consider repairing iPhones. The “easiest” way to get through to an iPhone’s internal construction would be to use a laser to raster-vaporize the adhesive and then shatter all the glass shards. If that sounds complicated, that’s because it is. Not only is it a complicated process, but it’s also a potentially dangerous one, as it requires extremely powerful equipment and safety gear unless you want to slice yourself with the laser.

In the iPhone 4, Apple opted for an open-back design, which allowed third parties and tech-savvy customers to implement all kinds of cool customizations, such as a transparent rear panel. The problem with this approach is that it made changing the screen extremely hard, and we know that screens are easily crackable. Then Apple switched to a front-focused design for the iPhone 5. They’ve stuck with this approach ever since, and although it makes repairs (marginally) easier, it’s still a huge pain for most repair shops.

What also made iPhone repairs difficult is that most of the time, you’d have to use Apple Care for any hardware support, as Apple would make it extremely difficult to purchase internal parts and pieces of technology for any of their iOS products. Any third-party repair shop that would try to fix a phone would have to pay huge amounts for small parts, which was just not profitable. So, customers are funneled into Apple Care, where the technicians would regularly suggest you get a new phone altogether or charge whatever price they pleased for even the most mundane fixes.

What Does Repairability Mean For Customers?

The right-to-repair movement advocates for allowing customers to keep their hardware for longer and repair them instead of purchasing new products every time something goes wrong. If Apple has easy-to-repair devices, then that means customers can keep their products for longer. Not only does this help customers’ wallets, but it also helps with environmental issues.

In a race to stay relevant and constantly improve, Apple releases new products every year, which can be hard to keep up for many. You may choose to skip certain iPhone versions and wait until you need it, but every time you replace your iPhone, if not disposed of correctly, goes straight to a landfill. E-waste is a huge problem, especially as many toxic chemicals can leak out into landfills or the ocean (depending on where they end up). An iPhone that’s easily repairable is good news for the environment and your pocket.