You are here: Home / How-to / How to get your iPhone screen to rotate again

Sometimes it’s the simple things that trip us up.  The other day, a friend of mine wanted to show me a video on YouTube.  But she couldn’t get the video to play in landscape mode.  She was very frustrated!

I quickly showed her how to get the video playing widescreen by unlocking iPhone Screen Rotation.  It was an easy fix.  But it reminded me that it is often the things we think of as easy that prove the most challenging (and frustrating).

So just in case you or one of your good friends has this problem too, I wanted to share the simple fix to getting your iPhone, iPad, or another iDevice screen to rotate.

First off, some apps don’t rotate at all. Some apps use only portrait mode while others only use landscape mode.  Some apps also switch depending on content.

For those with iPhone 6 models or later, check that you are set to the Standard Display mode. With the Zoomed view set ON, the Home screen won’t rotate to landscape mode.

You can also use iTunes to turn off Zoom

Sometimes it’s a good thing, and then there are other times when it really gets in our way…

Please note, for owners of iPhone 6/7/8 and 6s/7/8 Plus, when Display Zoomed is ON, the screen doesn’t rotate to landscape mode

Unlocking your iPad Screen Rotation via Side Switch

Specific iPad models have a side switch for locking and unlocking screen rotation.  The side switch is just above the volume buttons and toggles on/off.

The side switch function is set via your Settings menu to either lock the display screen orientation or mute certain sounds.

How to Check Your iPad’s Side Switch Setting 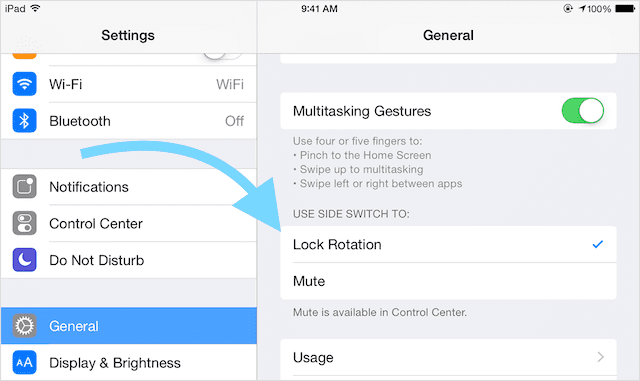 If Orientation Lock is ON, you’ll see a lock icon inside a circular arrow in the status bar at the top of your screen.

If Side Switch is set to Lock Rotation

If Side Switch is set to Mute

Remember that your iPad display might not rotate because the app you’re using does not allow screen rotation.  To check that the problem is app related, go to your Home Screen and try and rotate the display.

If that doesn’t work, make sure you check the status bar and see if Orientation Lock is ON.  If it’s on, turn it off via the side switch or control center.

When Nothing Works When Trying to Unlock iPhone Screen Rotation

If you’ve confirmed that Orientation Lock is off and you’re still unable to rotate the display, it’s time to restart your iPhone, iPad, or another iDevice.

If you are unable to restart this way, then you may need to force a restart.

How to force restart

Forcing a restart is your choice of last resort.  Try a normal restart a couple of times.  If that doesn’t do the trick, only then perform a force restart.

The Same Old Song, Update Your iOS or iPadOS

You probably have heard this a million times from Apple and Apple Support Sites like Apple ToolBox, check to make sure you are running the latest version of iOS or iPadOS.

If an update is available, go ahead and install that update, making sure you back up to iCloud or iTunes or Finder FIRST.

Updating your device’s iOS may just solve your problem with iPhone Screen Rotation.

When to Visit Apple Support

If you still cannot get your screen to rotate, and you’ve tried all the steps above including unlocking screen orientation and restarting, then it’s probably a hardware problem.  Screen orientation is controlled by a sophisticated sensor called the accelerometer.

Yes, it sounds like something out of James Bond films or Austin Powers, but the accelerometer is indeed real.  It tracks your iDevice’s movements.  So if the accelerometer is broken, it cannot track movement and consequently doesn’t recognize when to rotate the screen.

If you suspect your accelerometer is broken, it’s time to schedule an appointment with your local Apple Genius.  Hopefully, you are still covered under warranty.