You are here: Home / Mac / macOS Mojave to Kill Many Safari Extensions: Here’s What You Should Know

Is Safari on macOS Mojave wreaking havoc on your third-party extensions?

Many users are reporting that Safari no longer runs their third-party extensions, and will even display warning messages saying that the extension is “unsafe.”

There’s actually a valid reason for this. Here’s what you need to know.

Beginning in macOS Mojave, Apple is axing support for third-party extensions in Safari.

Essentially, this is a security measure. Unverified third-party extensions can be dangerous by way of hosting malware or even data extraction tools — which could give malicious entities access to all of your passwords and other sensitive information.

Moving forward, you’ll only be able to use extensions that have been vetted by Apple.

That might include offerings on the Safari Extension Gallery or Safari app extensions in the macOS App Store.

In fact, at an unspecified point in the future, Apple will no longer support the Safari Extension Gallery at all.

In other words, the only way to get a Safari extension will be to download it as an extension attached to an app on the macOS App Store. 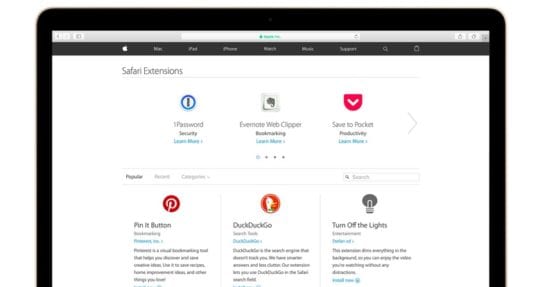 People who are cynical about Apple might say that this is a money-grabbing ploy.

The $99 to host an extension, which requires a developer account, is quite a bit more than competing app marketplaces. That could put free extensions with smaller user bases at an inherent disadvantage. Or it could dissuade them from developing for Safari entirely.

Similarly, killing off the Extension Gallery may be seen as another evil by some. Many users point out that app extensions just aren’t as capable as browser-based extensions.

On the other end of the spectrum, the fact that Apple cares about its users’ security is a good thing.

Just think of how many malicious browser extensions get passed around on other ecosystems, like Google Chrome. Short answer: it’s a lot.

Vetting each and every extension is a move that Apple doesn’t have to take. But it is because security and privacy are fundamental aspects of the company’s vision.

How to Get Third-Party Safari Extensions

Even with the bump in security, if you have a third-party extension that’s important to you, this is still a piece of bad news.

There are, however, several things you can try if Safari killed your favorite browser extension in macOS Mojave.

By and far the easiest way to keep using your favorite extensions are to seek out the Apple-vetted versions.

You might be able to find a vetted alternative. Otherwise, you can try moving on to the next step if no other option is available.

Most app developers will try their best to keep their applications running smoothly across software changes.

Depending on who developed your favorite extension, it might be worth getting in contact with them. Google your third-party app extension or its developer. You should be able to easily find the developer’s website.

Just look for any contact details and get in touch with them. Ask them if it’s possible for them to get their extension in the Gallery or the macOS App Store.

To be clear, you might not hear back from every developer. That’s especially true if it’s a smaller extension or one that doesn’t have a strong user base.

But if there’s an important extension you rely on, it’s worth a shot.

If you’re truly committed to using an unverified third-party extension, there are some bypasses currently available.

To future-proof this article, we have left out the exact details or steps of these methods.

That’s partly because Apple is incredibly likely to shut down these workarounds as they discover them. The company is doubling-down on its security measures, and coming down hard on unveiled app extensions is just one part of that.

Web and iOS developer George Garside detailed one of these currently working methods in a blog post recently. It’s a bit involved of a process, but it will allow you to continue running third-party Safari extensions.

As of July 2018, this bypass should still be functional. But we will update this article when that is no longer the case.