Whenever Apple’s WWDC rolls around that means that we’re usually in store for a lot of changes to Apple’s various operating systems. Naturally, this includes the likes of iOS, macOS, and iPadOS, but it also means new features are in the pipeline for the Apple Watch and watchOS.

While many of us were impatiently waiting for Apple to debut the new changes coming to iPadOS 16, Apple detailed quite a few interesting and downright helpful features coming with watchOS 9. Some of these may not seem as exciting as Stage Manager on macOS or iPadOS, there are plenty of new health benefits on the way.

It was only a matter of time, but there’s one big omission from the list of watchOS 9 supported devices. The Apple Watch Series 3, first released in 2017, is not compatible with watchOS 9, leaving the Watch Series 4 from 2018 as the now-oldest supported smartwatch.

Unfortunately, we will be unable to use custom-created third-party watch faces once watchOS 9 is available for the masses. However, there are four new watch faces to choose from, each offering a different design than what we’ve previously seen.

Changes are also coming to complications for existing watch faces, providing users with a bit more customization and personalization compared to previous releases.

watchOS 9 introduces enhanced and modernized complications on some of the most classic watch faces, such as Utility, Simple, and Activity Analog, along with background color editing for Modular, Modular Compact, and X-Large for additional personalization.

Thanks to the improvements found with Focus across Apple’s different platforms, users are now able to select specific watch faces that appear whenever different Focus Modes are enabled. For example, you could have a Modular watch face appear with your calendar for the day in the morning, and then another one with sleep tracking or other complications at night. 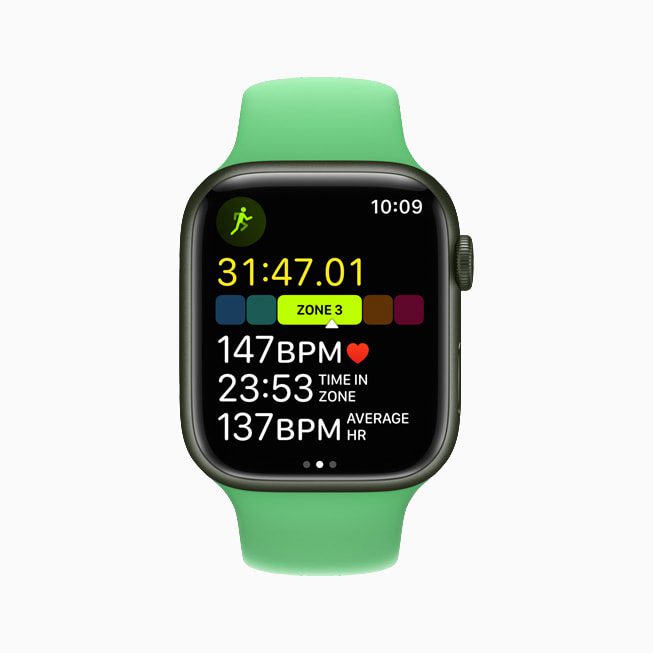 The Workout app on Apple Watch is also being improved, bringing with it even more details and information that can be viewed on your wrist. And instead of needing to swipe or tap the screen to view different metrics, you can now use the Digital Crown on the side of your Apple Watch to switch between metrics depending on your “training styles”.

Heart Zones is a new feature that makes use of your Health data in order to “monitor the intensity of a workout”. And this can be “manually created or automatically calculated”. It’s just another example of helping you make the most out of your workout sessions whenever you decide to hit the gym. Speaking of which, watchOS 9 gives you more control over your different gym sessions thanks to Custom Workouts, which can be used to create a structured workout that can include work and rest intervals”.

When watchOS 9 hits your wrist later this year (unless you jump on the beta before then), runners and swimmers will enjoy new and unique metrics. These include Stride Length, Ground Contact Time, and Vertical Oscillation. Apple is making it possible to add these in various workout views, while also showing them right in the Health app. Not only does this aim to improve your form, but it can also show you different patterns in an effort to provide a better understanding of how you run.

It’s pretty obvious that Apple wants to improve your workouts by any means possible. Fitness+ is getting a bit of an upgrade, as it will now show on-screen guidance “in addition to trainer coaching to help users get the most out of workouts, including: Intensity for HIIT, Cycling, Rowing, and Treadmill; Strokes per Minute (SPM) for Rowing; Revolutions per Minute (RPM) for Cycling; and Incline for walkers and runners in Treadmill.”

But perhaps even more exciting is the fact that Fitness+ subscribers will finally be able to AirPlay their workouts and meditations to “compatible third-party TVs and devices”. Until now, you were limited to using an iPhone, iPad, Mac, or Apple TV, but this finally makes it possible for anyone to follow along with a workout on a bigger screen. 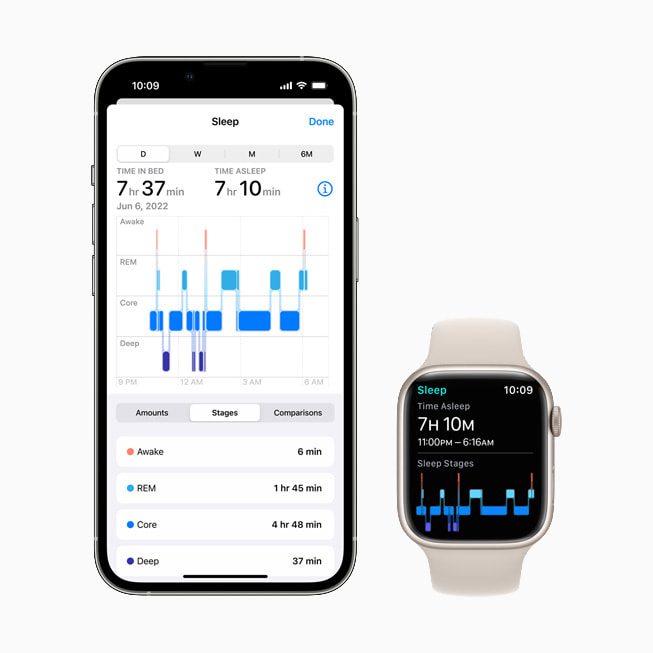 We’ve had sleep tracking on the Apple Watch for a little while now, but some rather helpful improvements are on the way. Apple’s watchOS 9 finally unlocks the ability to have your watch detect which sleep stage you are in, before showing that information in the Health app. Then, you’ll be able to get a detailed breakdown of each night’s sleep, including how long you were sleeping, along with your heart rate and respiratory rate. 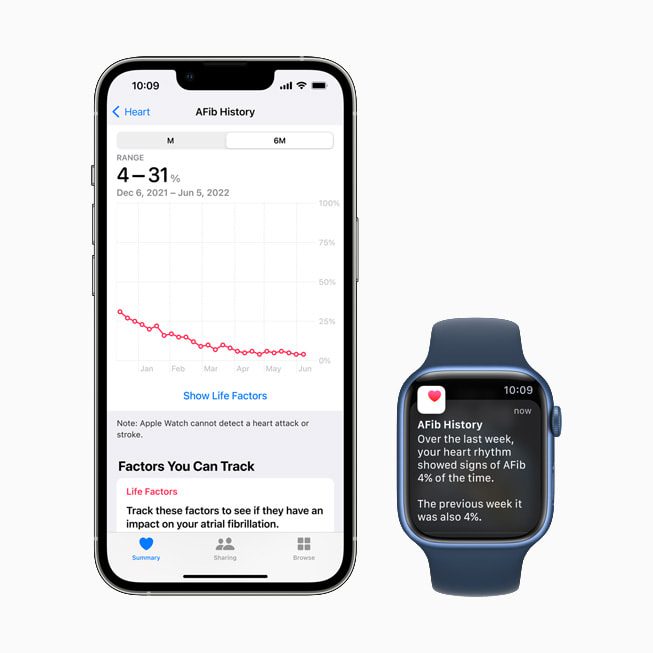 One improvement that we’ve seen those in the fitness wearable space head towards is AFib detection and history. Apple was just recently granted FDA approval on AFib tracking, and watchOS 9 is able to keep track of your AFib History in an effort to provide “deeper insights into their condition”. You’ll also be receive various notifications designed to help you understand what could affect AFib. Because all of this information is housed in the Health app, you can download a detailed history via PDF to share with your health care provider. 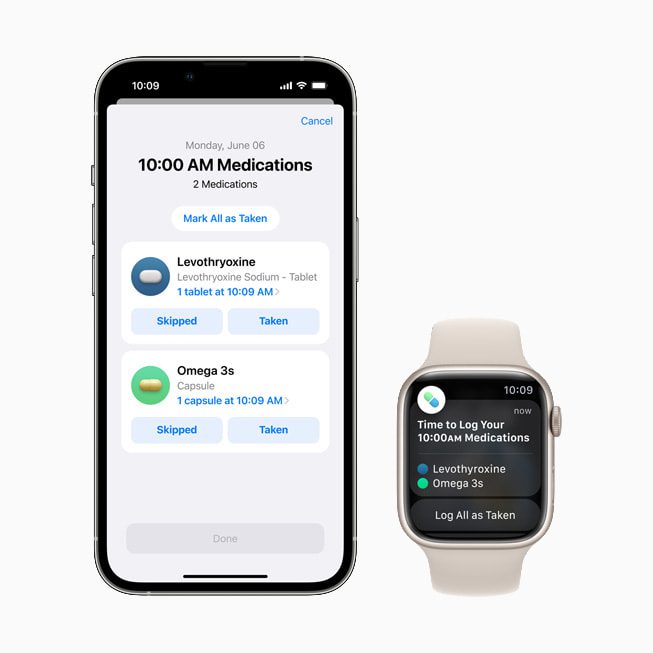 Gone are the days where you need to remember to use the Reminders app to take your medication. The Health app on both iOS 16 and watchOS 9 now includes a new “Medications experience”. Along with entering the different medicine that you take, you can set reminders that appear on your various devices.

Apple is making it possible for you to create custom schedules based on your needs. Plus, the Health app will inform you if there are any “critical interactions” between your medicines or if there is a potential for “unexpected side effects”. 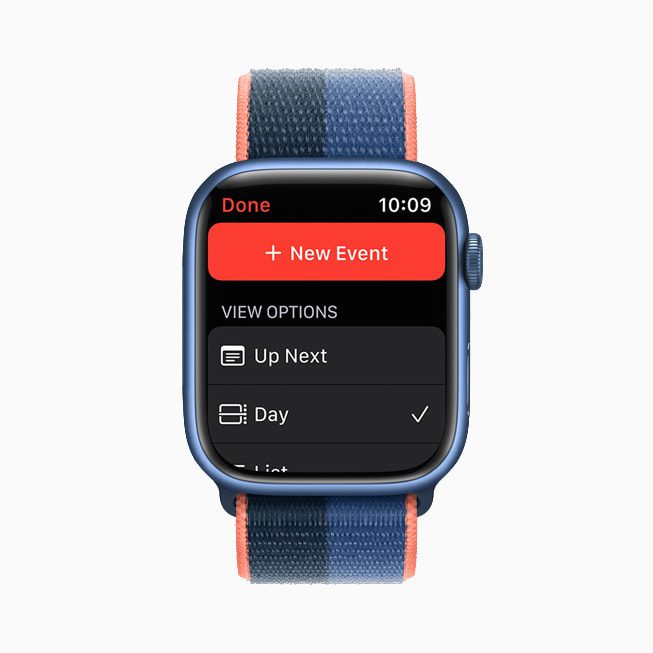 That’s a lot of information to digest, but there’s even more to watchOS 9 than just the headlining features. Here’s a quick breakdown of a some other new features coming later this year:

When Will watchOS 9 Be Available?

Those looking to get their hands on the latest version of watchOS will have a bit longer to wait until this Fall when Apple pushes the final version. If you are a developer, you can download Beta 1 of watchOS 9 today, and we expect a Public Beta to become available sometime in July. We do not recommend installing this update if you are not a developer, as you are likely to experience plenty of issues. Unlike the iPhone and iPad, you are currently unable to downgrade to a previous version.