You are here: Home / iPhone / Why are apps are asking to use Bluetooth in iOS 13 and iPadOS? 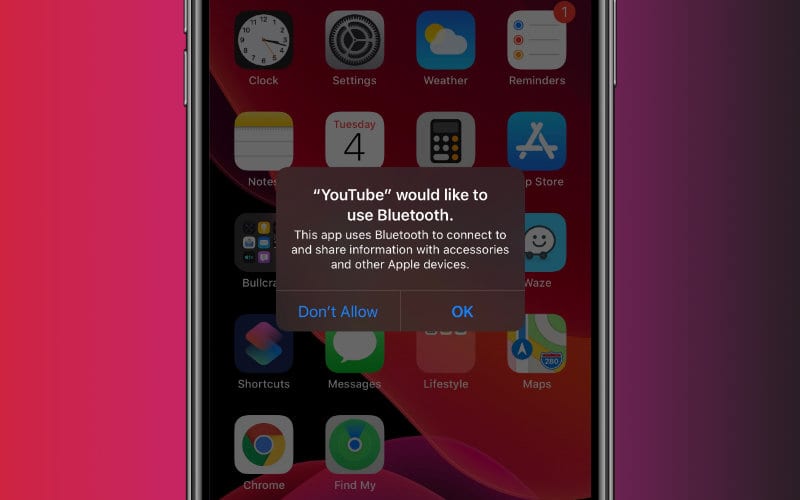 Getting a bunch of notifications alerting you that third-party apps want to use Bluetooth and asking your permission for location access via Bluetooth? Are a lot of apps asking to use Bluetooth accessories? Not sure what to do about it–to allow or disallow?

With the public release of iOS 13, (iPadOS dropped later at the end of the month,) several users have pointed out the surprising (and slightly alarming) range of apps asking for your permission to use Bluetooth.

Google, Facebook, YouTube, and Spotify all request Bluetooth permission in iOS 13. But so do some banking apps, ride-sharing apps, and even food delivery apps like Dominos.

Let’s explore some of the reasons these apps might want access to Bluetooth on your iPhone or iPad. And how you can control it.

An important thing to note is that the apps themselves haven’t changed. They used Bluetooth on your device before iOS 13, but you didn’t get notified about it. Instead, your device granted access in the background.

So all the apps that pop up and ask to use Bluetooth on iOS 13 were probably already using it in iOS 12. There are plenty of good or bad reasons they might want to do so. But as it stands, there’s no easy way to tell what they are.

When an app wants to use Location Services you get a similar notification, which is even better in iOS 13. But unlike Bluetooth, Location Services requests can justify why they need access on your iPhone or iPad.

Developers can list the reasons they want to access your location, along with what you gain from it. It’s usually something like “local recommendations” or “estimated travel times.”

But Bluetooth notifications all have the same stock text, reading:

“This app uses Bluetooth to connect to and share information with accessories and other Apple devices.”

There’s no way for developers to explain why they want to use Bluetooth. Hopefully that changes for the public release of iOS 13 this fall.

There’s been a fair amount of negativity around this issue, so I wanted to start it with a positive jam. Let’s assume app developers want the best for us and look at some good reasons an app might use Bluetooth.

Spotify uses Bluetooth to recognize when you’re connected to a car stereo, so it can switch to Car View. Similarly, Google Maps uses pins the location you disconnected from your car stereo to mark where you parked.

YouTube and other video apps connect to dongles like ChromeCast over Bluetooth. Other apps use Bluetooth to connect to headsets, storage devices, and other accessories.

Even Apple makes use of Bluetooth in the new Find My app to locate offline devices.

Unfortunately, it’s naïve to believe app developers only want the best for us. In fact, Apple changed Bluetooth access in iOS 13 because developers took advantage of it.

Nefarious developers use Bluetooth to track a user’s location. They can do this when you aren’t using their app. And they can do it without asking for your consent.

This is precisely why Apple changed the Bluetooth permissions in iOS 13 and iPadOS. And it’s why you should pause before you allow Bluetooth access to apps on your iPhone or iPad.

Take a moment before allowing an app to access Bluetooth on your iPhone or iPad. Ask yourself why that app needs Bluetooth and whether you trust the app developer or not.

Our suggestion is to deny access for everything, to begin with. Use the app as normal. It might surprise you what you can still do without Bluetooth.

For example, Spotify can send music to wireless headphones without Bluetooth. It can even seamlessly switch playback to your other devices!

If you find a feature you want that needs Bluetooth to work, change your Bluetooth permissions in the Settings.

How do I allow or deny Bluetooth for apps in iOS 13 or iPadOS?

Let us know in the comments which apps requested Bluetooth access on your iPhone or iPad? Did you let them have it? And what was the result?