Every time you turn around, another YouTube personality or channel has made the move from 4K to 8K in terms of video content. Of course, there aren’t any 8K displays available for purchase as of yet. But this isn’t just about video quality. This also helps to provide the best quality possible for your YouTube for your viewing pleasure.

A little more than three years ago, back in 2017, it was discovered that you were no longer able to view YouTube videos in 4K when using Safari. The problem wasn’t just with YouTube, but users also reported the same problem when trying to watch Netflix.

It all started 5+ years ago

It seems that Google switched its encoding process, which actually began all the way back in 2013. In a blog post from 2015, the YouTube Engineering team shared why the change to the new VP9 open-source codec was taking place.

Nevertheless, the change left Safari users wondering why they couldn’t view content in 4K any longer. Instead, you were forced to switch over to Chrome or something like Firefox or even (more recently) the Chromium version of Microsoft Edge.

Since then, those wanting to watch that crispy 4K footage on YouTube were simply out of luck. But that all changed in macOS Big Sur. Throughout the beta process, Apple began testing support for the V9 codec that had been missing since it was introduced. Surprisingly, support for VP9 had been missing on the iPhone and Apple TV. With iOS 14 and tvOS 14, all that has changed, bringing compatibility to the most popular Apple devices.

You may not have ever noticed that you were unable to view content in 4K. That could be in part due to the monitor being used with your Mac, but it’s easy to check for compatibility. Here’s what you need to do:

If you are already capable of watching YouTube in 4K, then you will see an option for 2160p. If not, then that means there are a few extra steps that you have to take.

As we’ve stated, Google introduced a new open-source codec for YouTube all the way back in 2015. This new codec, named VP9, provided an all-new way for videos to be compressed. With the new codec, you would be able to watch HD and 4K content at “half the bandwidth used by other known codecs”.

The primary benefit of using VP9 over one of the older standards has everything to do with providing smooth playback for those with limited bandwidth. Another benefit of using VP9 is that since it doesn’t use as much data to compress and decode the videos, this means that less data is being used. Less data being used means that you are able to use more data for other reasons on your iPhone or another smartphone.

For a few years, the ability to watch 4K YouTube videos on Safari went uninterrupted for many. Then in 2017, more and more users began noticing that they were unable to watch 4K videos any longer. Everything came down to the transition from the older H264 codec to the newer VP9 codec. And since then, Safari users have largely been left out of the fun, unless you just switched over to a different browser.

With macOS Big Sur, Apple has introduced support for the VP9 codec, but there’s a chance that it may not be enabled. For some reason, the ability to turn this on is “hidden”, but it is possible for you to enable the VP9 Decoder. Here’s what you need to do:

After you have restarted Safari, follow the instructions above to see if you are able to view 4K YouTube videos. If the problems persist, then close Safari, restart your Mac, and then try again. 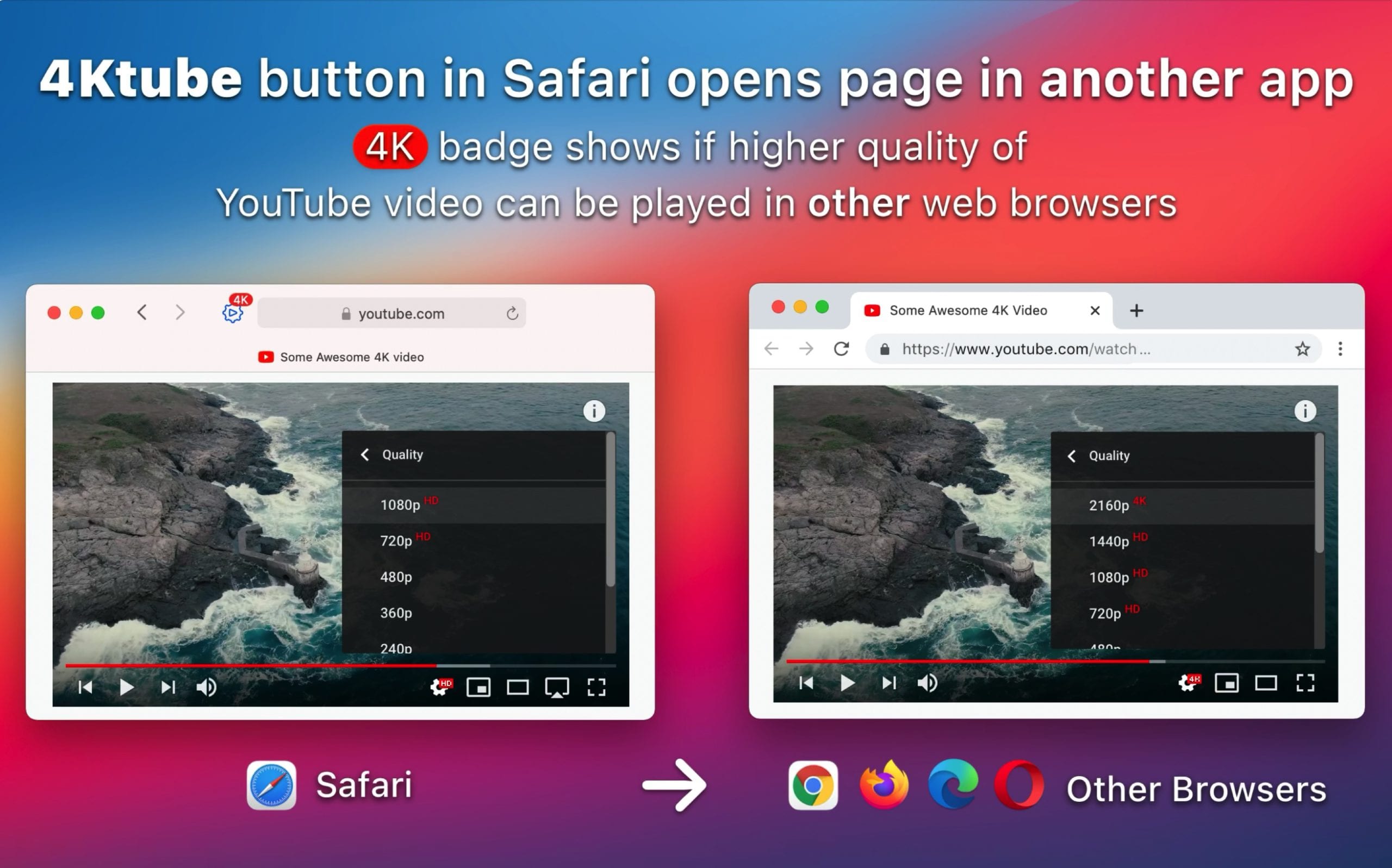 For those who continue to have problems with viewing 4K content, but have another browser installed, there’s a useful tool available. 4Ktube is an application on the Mac App Store that works as a Safari Extension and will show a badge in the toolbar.

If the video is available in 4K, but won’t work with Safari, you can click the icon and a new browser window automatically opens. But instead of opening in Safari, you can configure which browser you want the new tabs to be opened. This is an awkward workaround, but if you really want to watch your 4K YouTube videos, then it’s better than just using a different browser all together.

There is always a concern when it comes to apps that have been abandoned by still live on in the Mac App Store. Thankfully, that’s not something to be worried about with 4Ktube. The developer is actively updating this application, as a recent update brings support for the M1-powered Mac computers.