You are here: Home / iPhone / How to Remove Sideloaded Apps, Spam Mailboxes & Profiles From Your iPhone and iPad

In the wake of recent news, you may be wondering how to remove sideloaded apps from iOS. Luckily, the process isn’t too difficult.

First, let’s review a bit of context. Sideloading, basically, is a method of installing an app onto a device without using the platform’s usual app distribution method. In the case of iOS, it’s installing an app without the App Store.

Sideloading is fairly common among enterprise users and corporations. Large entities will use sideloading and mobile device management software to install and keep track of apps and settings on their employee’s devices.

But there could be a darker side to sideloading. 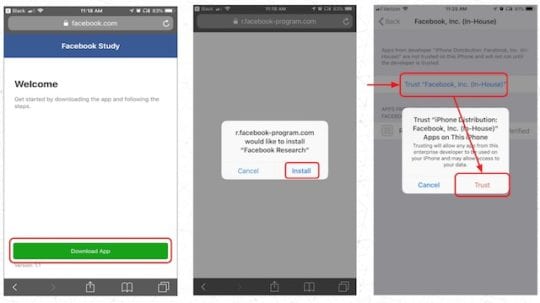 As with anything else, there is always the possibility for that feature to be abused.

Facebook and Google were recently in the news because they used enterprise developer certificates to sideload apps onto user devices.

Both companies had to bypass the App Store on iOS because those sideloaded apps gained access to a root certificate and spied on their users. That was a pretty clear violation of Apple’s App Store Review Guidelines.

Of course, enterprise developer certificates aren’t supposed to be used for this. So Apple revoked both Facebook’s and Google’s certificates in the wake of the abuse’s discovery. While that rendered the apps nonfunctional, there may be other firms or entities out there that use similar methods.

But sideloading apps can also be more malicious in nature. Malevolent entities may coerce or trick users into downloading sideloaded apps that can steal sensitive data from a user’s device.

Sometimes, these sideloaded applications will appear as spam-like mailboxes or as spammy apps. In either case, they might seem incredibly resistant to deletion.

Again, Apple’s stringent developer guidelines prevent most malicious apps from becoming an issue on the App Store. But as long as malevolent entities can trick you into sideloading an app, they can still get malware and spyware onto your iOS device.

How to Remove Sideloaded Apps

The first step in removing sideloaded software is to delete any app on your iOS Home Screen’s app grid.

This is the same process as other apps

But sideloaded apps may also install what’s a management profile or configuration profile onto your device.

That could make it tricky actually to get rid of a sideloaded app.

These configuration profiles are typically used by MDMs or enterprise users, but they can also be harnessed by spying companies and bad actors.

Sometimes, a spam profile will also add a mailbox to your account. You may keep receiving spam emails from this mailbox, even after you’ve deleted the profile associated with it.

You can manually remove a mailbox by going to Settings —> Passwords & Accounts. But keep in mind that you may need to delete the configuration profile first.

How to Avoid Sideloaded Apps

An ounce of prevention is worth a pound of cure, as the saying goes. When it comes to sideloaded apps, it’s ideal that you avoid downloading them in the first place.

Even if you realize that the app is a piece of malware or is secretly spying on your, there is always the chance that it will collect sensitive data from your iOS device before you get the opportunity to remove it.

Here are just a couple of tips to keep you and your data safe from malicious sideloaded apps.

We hope that you found this article useful and informative. Our suggestion is to always stick to downloading apps from the Apple App store. Please let us know in the comments below if you have any questions or tips that you would like to share.