You are here: Home / iPhone / How to do a reverse image lookup on your iPhone or iPad

So-called “catfishing” scams remain alive and well online, especially on dating sites where folks are looking for romance. This type of deceptive activity, which often involves scammers posting fake images online, is easier to thwart thanks to browser-based reverse image lookup tools such as the most popular one on the planet, Google Images.

Doing a reverse image lookup on your iPhone or iPad isn’t the same as doing it on your computer. Here are the most popular ways to do this.

What is Reverse Image Lookup?

This type of lookup is typically used to find out the source of an image, or find higher resolution versions. Most searches also allow you to discover where on the web the image appears. Although each image lookup solution is different, most perform their tasks by analyzing the submitted photo and constructing a mathematical model of it using advanced algorithms. It then compares that information with other images online.

Doing Lookups on Your iOS Device With a Web Browser

There are two main ways to do reverse lookups through a mobile device. These ways include through a web browser and an app.

The easiest way to do a reverse lookup on your iOS device is through Google Chrome. To do so: 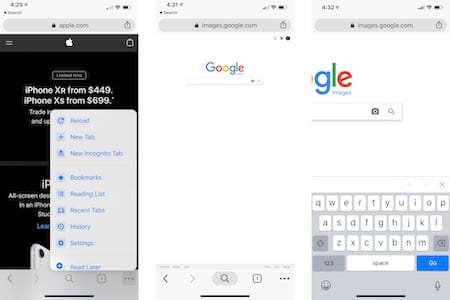 After you import your image, Google will show you whether it found the photo elsewhere on the web. It will also show you a list of visually similar images.

You can perform a similar task on the mobile version of Safari by doing the following: 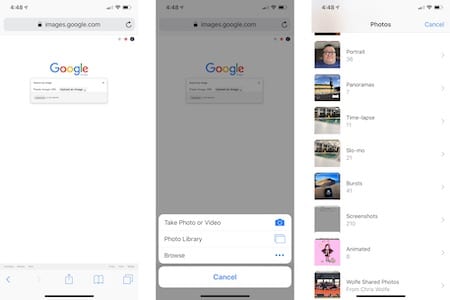 After you import your image, Google will show you whether it found the photo elsewhere on the web. It will also show you a list of visually similar images.

Perhaps you’d like to use a mobile web browser to do a reverse image search, but don’t want to use Google Images. If that’s the case, two mobile-friendly web-based services stand out: TinEye and Yandex.

With TinEye, you can upload or enter an image URL. From there, the service will try to make a match. Once completed, you can sort the search results by Best Match, Most Changed, Biggest Images, Newest, and Oldest. You can also filter the results by domain.

If you can’t find an image match using other means, it might be worth your time to try this site. Yandex is a Russian-based service that you might want to use as a last resort.

If you want to use an app to do a reverse lookup, we’ve got you covered. Here are four apps that will help you learn more about an image.

This image search app uses Google’s engine to get the job done. If you’d rather use another browser, you can pay extra by making a one-time in-app purchase. Choices then include Google, Bing, and Yandex.

Reversee is much more than an image search app. It also includes valuable editing tools such as the ability to brighten, crop, and resize images on the fly.

If you don’t want to jump through the steps above to use Google Images through a mobile web browser, Reversee is perhaps the best alternative. You can download the Reversee app on the App Store.

CamFind wasn’t primarily designed to uncover catfishing schemes. Instead, it’s a shopping discovery tool. To use the app, snap a photo in the app. From there, the app matches the image against ones available on the internet and identifies the object.

For example, you might see a lamp in someone’s house that you’d like to buy. Snap a photo of it, and CamFind will attempt to find the item online.

Because you can also import an image from your iOS device’s camera roll, it serves the due role of helping you match pictures of people online. Although again, it’s not the primary purpose.

CamFind is free to download from the App Store and worth checking out. 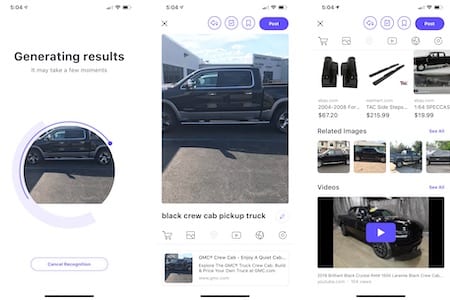 Here’s a freemium app that allows you to choose images from your Camera Roll, Photo Library, and Dropbox and see if they match to pictures on the web. The Veracity app isn’t the slickest in the App Store (an update would be nice), but some people love it, so that’s why we’ve included it here.

Not long ago, Google Lens was only available on Google’s lineup of Pixel smartphones. That is no longer the case. Apple iPhone and iPad users can use the tool in the Google app, which is available on the App Store. For more information, check out our Google Lens How To.

No matter the reason, reverse image lookup tools provide a great resource online. If you have an image you’d like to learn more about, turn to these tools to get the job done. If one tool doesn’t uncover anything, try another one and so forth.

What have you discovered using reverse image lookup tools? Let us know below.