You are here: Home / Apple Services / How To Download Apple Music and Apple TV on Windows 11

Before the calendar flipped over into 2023, Apple and Microsoft made a surprise announcement that it was working together again. This time around, Apple would be focusing on improving the overall experience for those who use Apple services alongside Microsoft’s Xbox and Windows platforms.

To the surprise of almost no-one, if you wanted to use Apple’s various services on Windows, it’s been an abysmal experience. But the tide has started to shift, following the introduction of Apple Music on the Xbox, along with iCloud Photos integration with the built-in Photos app on Windows 11 machines.

iTunes Won’t Be Around For Much Longer

One of the biggest sticking points for iPhone owners that use a Windows machine has been managing their devices with the iTunes app. Every other platform, besides Linux, has access to the “new and improved” Apple Music app. But there’s more to what iTunes had to offer than just offering music playback.

iTunes operated as the “brains of the operation” when you wanted to do anything that involved plugging in your iPhone or other Apple devices to a Windows machine. This used to also be the case on the Mac, but device management has since been integrated into the Finder app.

In an effort to provide a somewhat-seamless experience for all iPhone owners, regardless of what computer they use, Apple just released the first beta of the Apple Music, Apple TV, and another surprising app simply named “Apple Devices”. 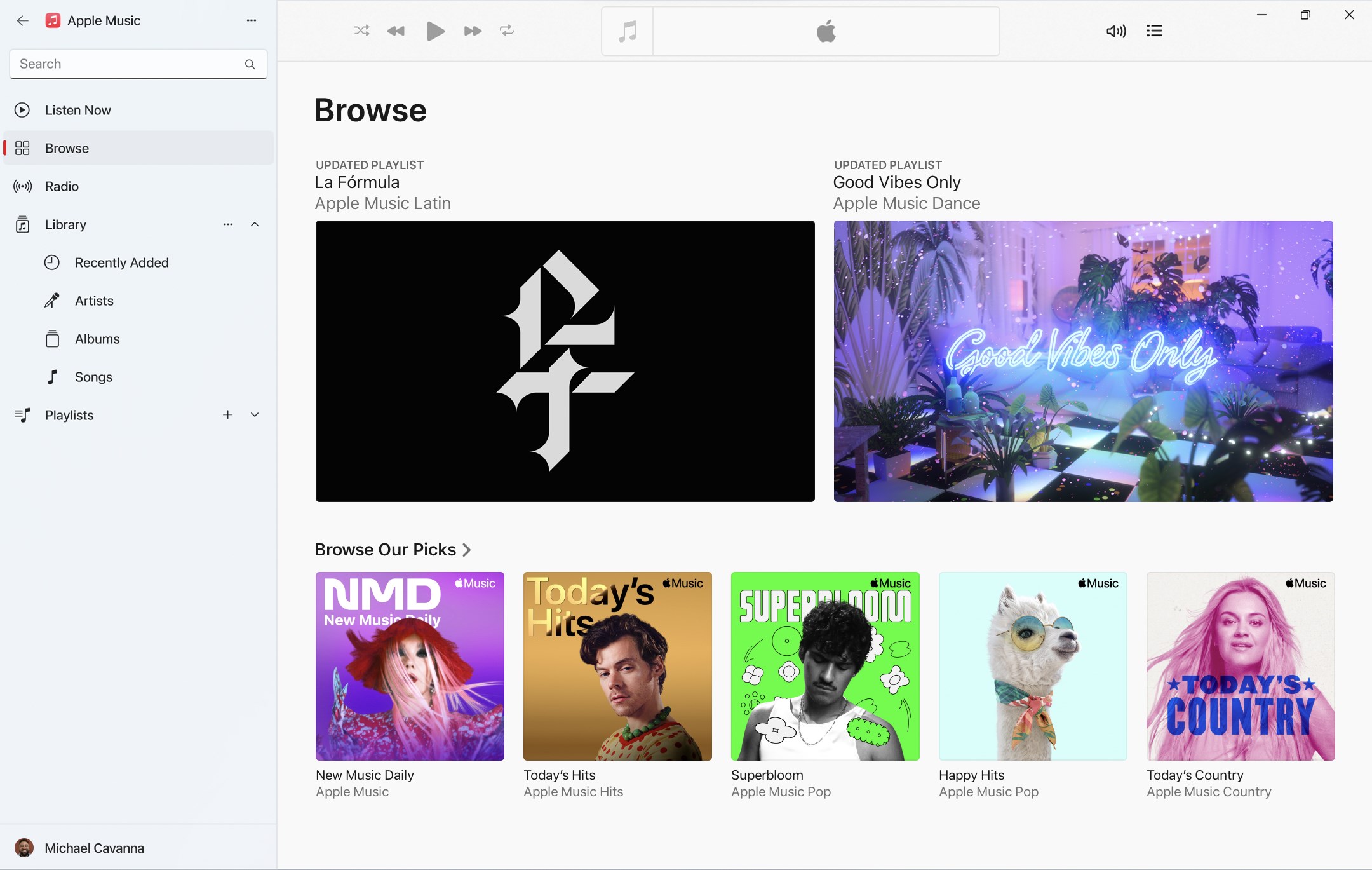 Starting with the Apple Music app, if you’ve used the Music app on macOS, or seen it in commercials, the Windows version looks almost identical. There are some design changes that were implemented to better fall in line with the overall design of Windows 11, but that’s not to say it looks bad.

After you sign in with your Apple ID, you’ll be greeted with a left sidebar that has the following options:

Obviously, selecting any of the options in the sidebar will then open the appropriate interface in the main window. Once you pick some music to start playing, the artist, song, and album information appears at the top, complete with the progress bar.

To the left of that box are your playback controls, and you can manage your Apple Music account by clicking on your name in the bottom left corner. While the app is still currently in beta, if you are able to install it on your Windows machine, there are a few things missing. An example of this is that you aren’t yet able to test out the “Lyrics” functionality found when using Apple Music on other platforms. 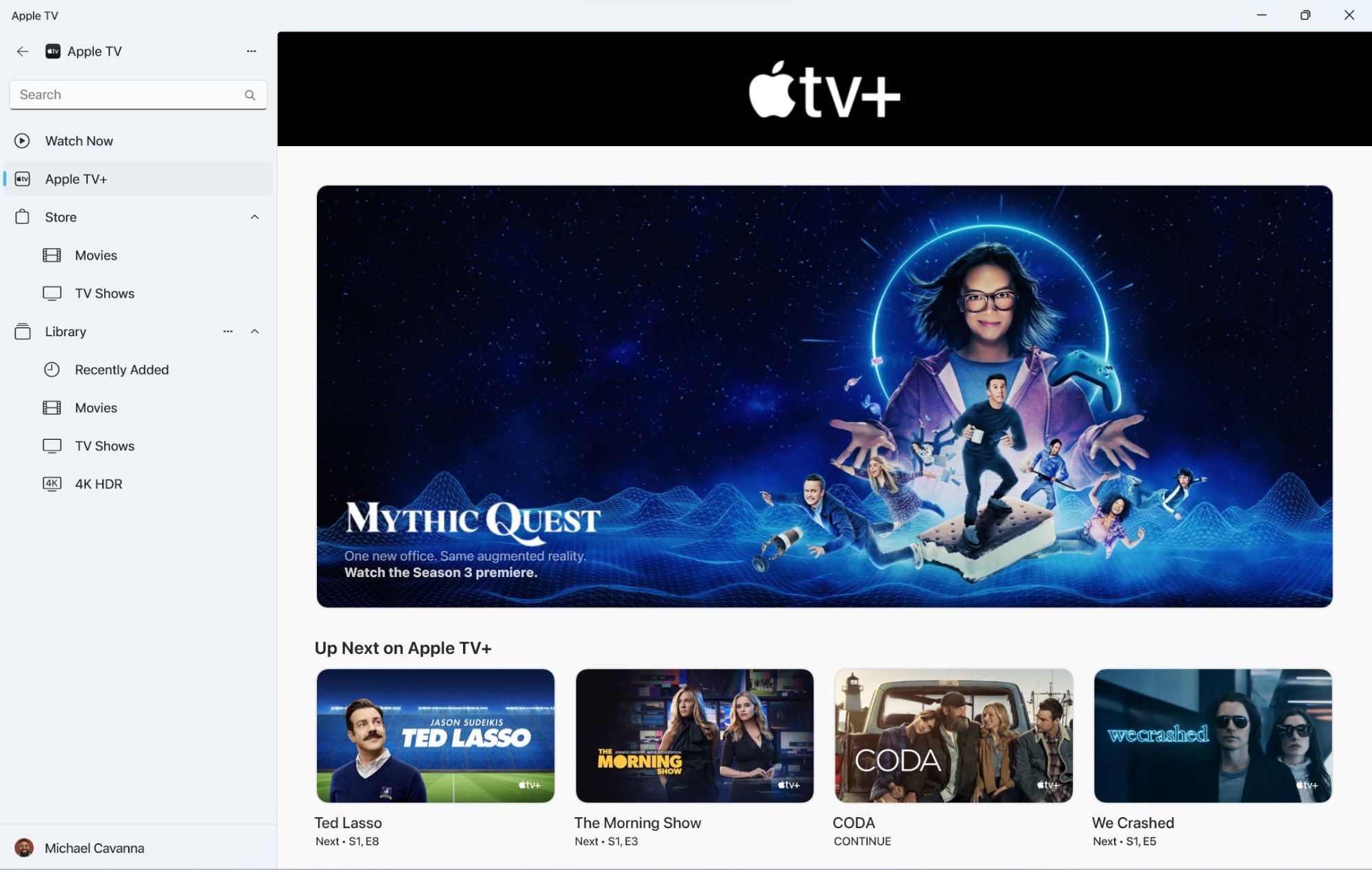 The biggest surprise isn’t the fact that Apple is finally bringing Apple Music to Windows. But instead, it’s that Windows users are finally getting a dedicated Apple TV app. As you can likely surmise, the overall design is quite similar to the new Apple Music app.

Once logged in, you’ll have an overview of some new content you might want to check out in the main window of the app. But there’s also a sidebar complete with the following:

Obviously, selecting one of those options will then display the TV Show or movie listing in the main window. Then, you’ll be able to fire it up without skipping a beat. Adding even more fun is the fact that the Apple TV on Windows also now supports 4K UHD HDR content, something that we weren’t really expecting to see. 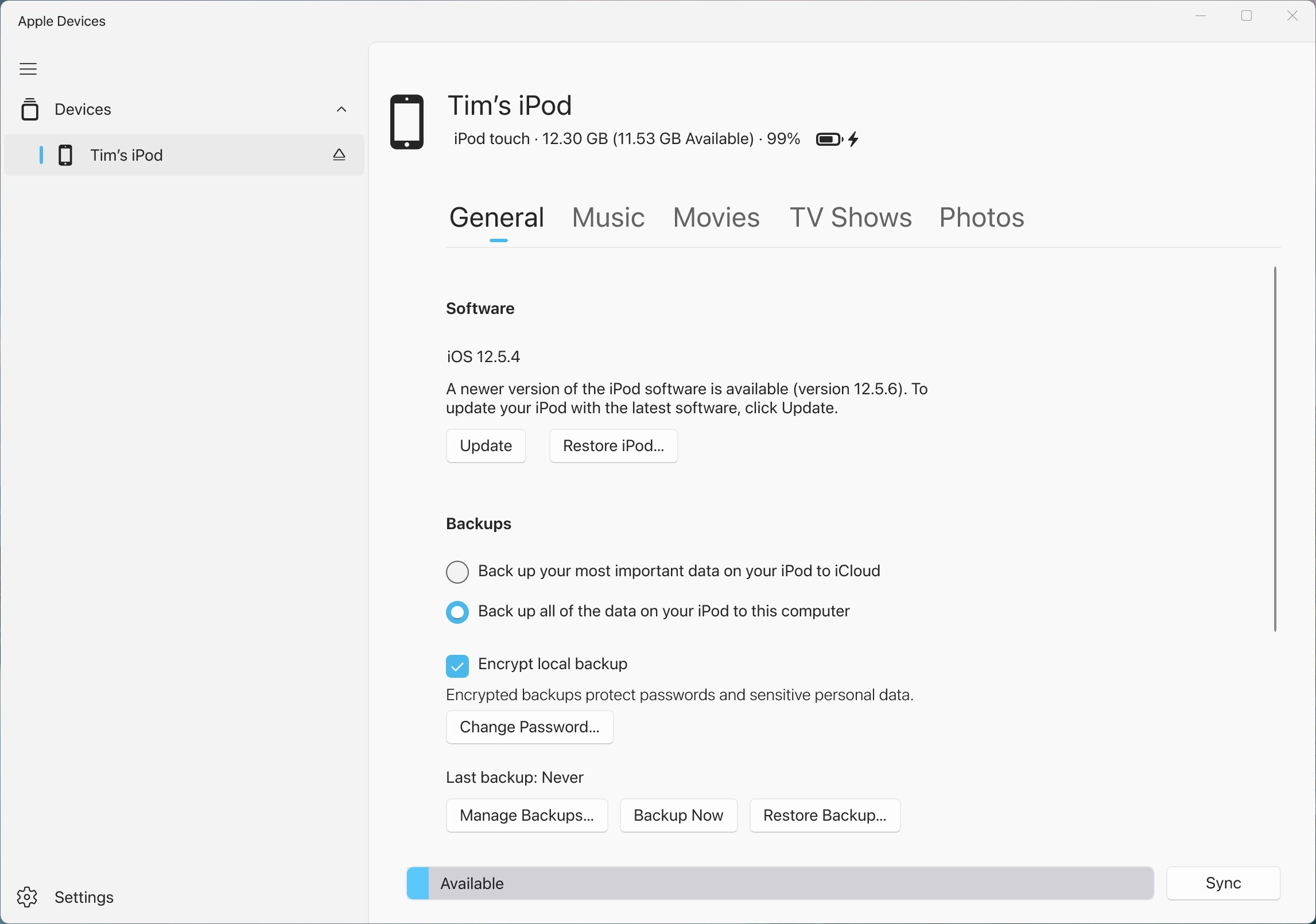 Rounding out this trio of surprises is another all-new app, but one that might seem like it’s coming out of left field. With Apple’s decision to transition away from the current iteration of iTunes, you’ll still need a way to manage your device when plugging it into your Windows machine.

That’s where the new Apple Devices comes in, as it will likely be place that you go if you want to physically transfer files or back your iPhone or iPad up to your Windows computer. As it currently stands, this is the only app of the three that we were unable to get up an running on our Windows 11 computers.

However, thanks to 9to5Mac, a screenshot of the Apple Devices app reveals that the interface looks pretty darn familiar. In the screenshot provided, an iPod Touch has been plugged in, with the main screen showing any potential updates, a button to restore your device, along with your back up settings.

At the top of the page, Apple has implemented tabs for the following:

And at the bottom of the window, you’ll see an overview of how much storage is left on your device, along with a “Sync” button in the bottom right corner. At first glance, it seems as though Apple managed to extract this singular screen from iTunes, and then use that to create a separate app entirely.

One thing that we want to point out is that if you decide to try out any of the apps we’ve discussed above, this means that you’ll be removing the current version of iTunes entirely. Well, it won’t be removed automatically, but the current iteration will no longer work after installing these apps.

When going through the installation process, you’ll see a prompt that states Apple will be releasing a new version of iTunes “in the future”. This is being done on purpose, as neither the Apple Music nor the Apple TV app include support for audiobooks or podcasts. What we’ll likely see is a slightly-redesigned iTunes app including support for those two media types. But who knows, maybe Apple will release a full suite of apps, including the Podcasts and Books app for Windows.