New software updates are always fun and exciting, as these usually usher in new features. Sometimes, the software updates points to unannounced features or even new hardware that is on the way.

But even for a company with great software like Apple, there are some bugs that can wreak havoc. We’ve seen more than our fair share of issues in recent years, with issues plaguing practically the entire release cycle of macOS Catalina. But things are looking up with macOS Big Sur.

When Big Sur was initially introduced, there was a lot of hemming and hawing about what this meant for macOS on the whole. That is, until Apple shared “One More Thing” at the end of WWDC revealing that Apple Silicon powered Macs were on the way. The reason for the hesitation was due to the updated interface which seemed more like iOS or iPadOS and less like macOS.

Now that the M1-powered Macs have arrived, there’s a bit better understanding as to why the interface has changed. A large part of the new Control Center and UI elements has to do with the compatibility with iPad and iOS apps on Big Sur.

Essentially, Apple is inching closer and closer to a unified operating system for all of its devices. At least, that’s what it looks like from our perspective. Catalyst apps are everywhere in Big Sur, ushering in uniformity between the Mac apps and their iOS counterparts. Notification Center looks just like it does on the iPad, and you can even take advantage of the new widgets on your Mac.

But there’s also a more fine-tuned focus on privacy, as evidenced by the new App Privacy section in the App Store. This is found at the bottom of each app listing, and reveals what data and information is collected and/or shared. Safari has also introduced a slew of new privacy and tracking features to help keep you informed.

Not everything is rosy in macOS Big Sur, as there are some new app compatibility issues, along with some changes to the system. One issue that continues to appear for those who have upgraded has to do with an activity known as “kernelmanagerd”.

With the update to Big Sur, there have been more and more reports about this task using upwards of 70% of the CPU power. Of course, with that much power being used, that leads to battery drain at unsettling rates.

The ‘kernelmanagerd’ is effectively how third-party apps use kernel extensions. Some may even come across something known as “kexts”. These are kernel extensions, which are a part of both the system and various applications. You may also know these as a kind of driver for macOS.

How to fix ‘kernelmanagerd’ CPU and battery drainage

In the early days of the macOS Big Sur beta cycle, the ‘kernelmanagerd’ issues were prevalent, regardless of what computer you were using. CPU usage ramped up seemingly at random times, draining your battery faster than ever. This was a huge source of frustration, but it all comes down to the apps that you use on your Mac. 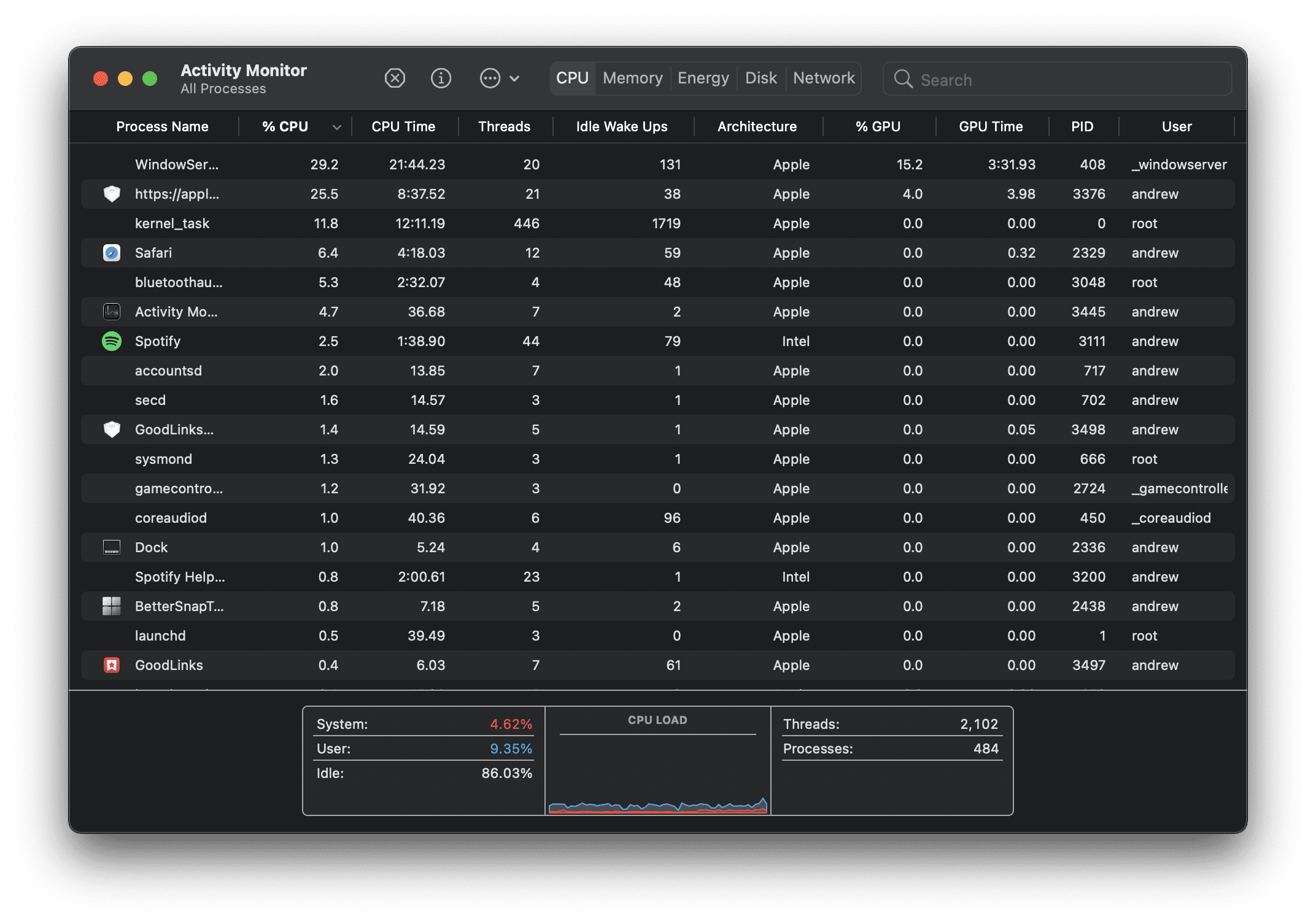 In order to make sure that ‘kernelmanagerd’ is indeed the problem, you’ll need to verify the information. Here’s how you can check your Activity usage to see if ‘kernelmanagerd’ as an issue.

An easy way to identify what is using the most CPU in Activity Manager is to clock the “% CPU” header. This sorts the processes from most to least (or vice versa). If kernelmanagerd is indeed the culprit, then you’ll see it at the top.

Check for an update

Although macOS Big Sur has officially rolled out to the public, that doesn’t mean that there aren’t still some issues. For example, the new M1-powered MacBook Air was released and there was a day-one update for Big Sur available out of the box. Apple is sure to push regular updates to Big Sur which could solve the dreaded ‘kernelmanagerd’ issues by itself.

It seems the a recurring theme for many folks who are running into this problem has to do with a program known as Sophos Home. This is an antivirus program that is touted as one of the best in the business by many popular websites. However, for whatever reason, Sophos Home does not seem to agree with Big Sur.

If you happen to use Sophos Home, recently updated to macOS Big Sur, and have the ‘kernelmanagerd’ issues, you’ll want to uninstall the app. Sophos includes an uninstall tool with the package that you installed. If you would rather use something else, we would recommend checking out App Uninstaller on the App Store. App Uninstaller not only removes the app from your Launchpad, but also locates any related files and removes them as well.

Delete and re-install any antivirus programs

As it turns out, Sophos Home is not the only antivirus app that causes issues with Big Sur. Malwarebytes has been known to cause the same issue. Apple has again added more features to make the latest version of macOS more secure. Part of this has to do with the new T2 security chip built into select Macs. But macOS also has features designed to keep your information protected and your Mac running in tip-top shape.

You may believe the old wives tale that Macs aren’t susceptible to malware attacks, that’s simply not true. The rise in popularity of Macs on the whole has turned these wonderful computers into targets for hackers. Unfortunately, as Big Sur is still (somewhat) in its infancy, there are bugs that need to be worked out and squashed by developers.

When it comes to antivirus software, you’ll want to find something lightweight that can handle keeping you protected, without slowing down your Mac. That’s a tall task, as a good antivirus or anti-malware program needs to search through every nook and cranny of the OS.

If you are running into the issues surrounding ‘kernelmanagerd’, then you will want to uninstall those antivirus programs. If you want to try something new that is lightweight and still great, then check out Avast Security for Mac.

Power drain and CPU usage could be caused by other apps

Although there are documented issues surrounding having antivirus apps installed and wreaking havoc, there’s more to the story. For instance, my own 2019 15-inch MacBook Pro has been suffering from the same problems sporadically. While researching this article, I found that Dropbox was partly to blame for the issues, using up much more CPU then I originally thought.

Considering that this app was nothing more than an icon in my menu bar, I never suspected Dropbox to be using so much. Needless to say, I’ve uninstalled the app from my Mac, and will instead be using the browser for my file uploads.

Just check out Activity Monitor if you notice your Mac working harder than it usually does, or if you run into battery drain.