You are here: Home / How-to / How to Enable and Hide Slide Over on iPadOS

The name of the game with the iPad Pro is productivity. While there are some fun new features with iPadOS, namely Xbox and PS4 controller support, these devices are meant to help you get work done.

Before Apple unleashed the iPadOS beta on the world, the iPad was capable of using multiple windows with the help of split-screen and Slide Over. Split-screen is self explanatory, as you can have two windows open side-by-side on your display. Slide Over allows for you to pull up a third app which opens in a window and can be moved around the display.

Enable/Disable Slide Over in iOS 12 and before

Back in the days of iOS 12 and before, Apple’s implementation of Slide Over, was pretty straight-forward:

If you already had Split Screen enabled, you could press hold on an icon from the Dock, and then drag the app over the divider. This would give you three apps to work with at the same time, hopefully making you even more productive.

Moving the app was quick and easy, as you would just touch and hold the top of the app, and slide it around. Then when you were ready to get rid of the third app, you would just hold the same spot at the top and swipe to the left from the right of the display.

How to enable Slide Over on iPadOS

Before you can hide Slide Over on iPadOS, you’ll need to enable it with the necessary app. Luckily, nothing has changed in that regards, as you’ll need to follow these steps:

As you can see, Apple has made life easy by not changing another, albeit minor, feature on us. This will give you an app that is overlayed on your screen, and you can move it about as you need.

How to hide Slide Over on iPadOS

Now that iPadOS is making its way into the hands of more and more users, there seems to be a change in the guard. Apple has decided to make things a bit more difficult if you need to hide Slide Over on iPadOS.

There are a couple of methods that you can take in order to get rid of the Slide Over panel, and they are all pretty simple. The first of which is simply grabbing the top of the app, and then swiping it to the right until it’s gone from the screen. 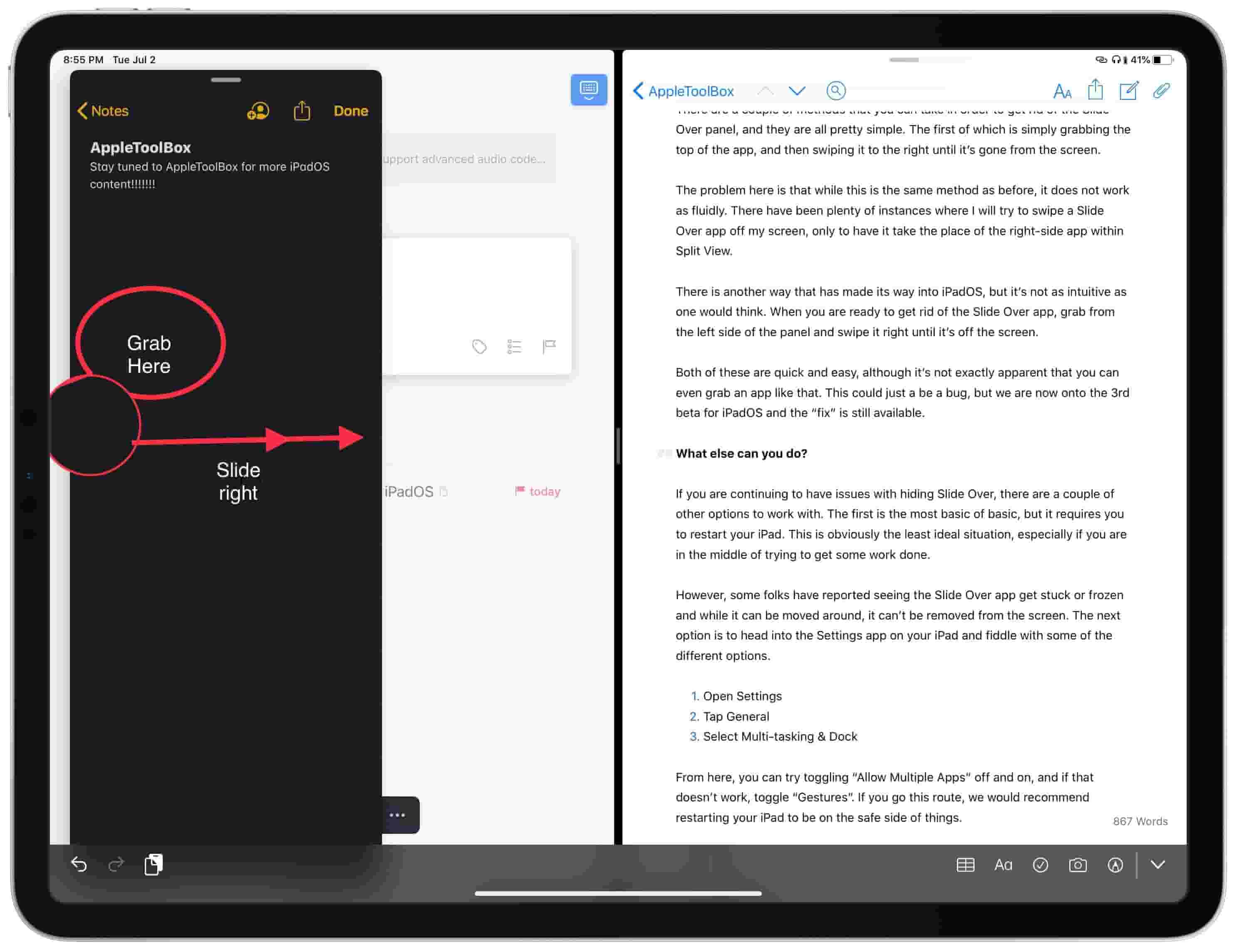 The problem here is that while this is the same method as before, it does not work as fluidly. There have been plenty of instances where I will try to swipe a Slide Over app off my screen, only to have it take the place of the right-side app within Split View.

There is another way that has made its way into iPadOS, but it’s not as intuitive as one would think. When you are ready to get rid of the Slide Over app, grab from the left side of the panel and swipe it right until it’s off the screen.

Both of these are quick and easy, although it’s not exactly apparent that you can even grab an app like that. This could just a be a bug, but we are now onto the 3rd beta for iPadOS and the “fix” is still available.

What else can you do?

If you are continuing to have issues with hiding Slide Over, there are a couple of other options to work with. The first is the most basic of basic, but it requires you to restart your iPad. This is obviously the least ideal situation, especially if you are in the middle of trying to get some work done. 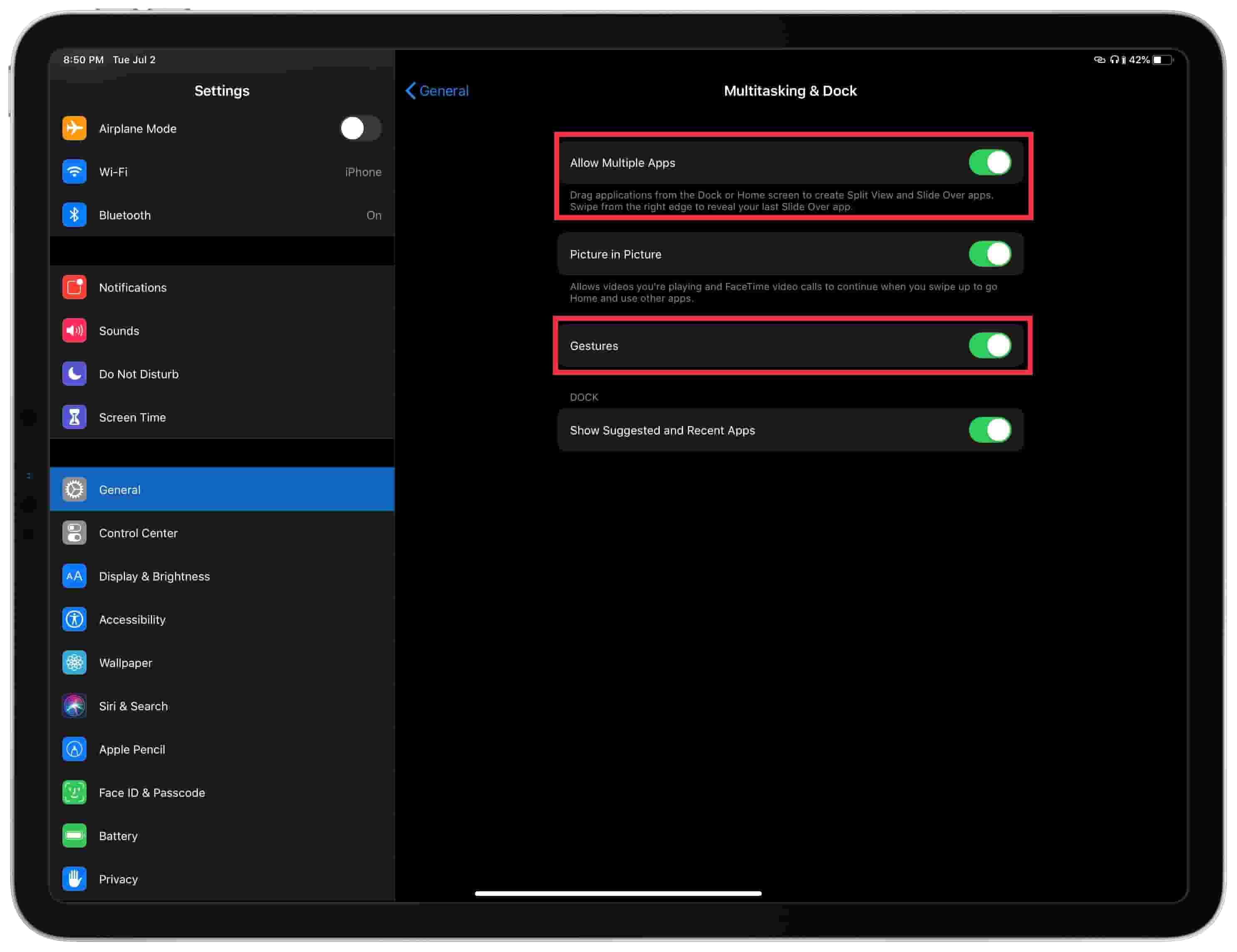 However, some folks have reported seeing the Slide Over app get stuck or frozen and while it can be moved around, it can’t be removed from the screen. The next option is to head into the Settings app on your iPad and fiddle with some of the different options.

From here, you can try toggling “Allow Multiple Apps” off and on, and if that doesn’t work, toggle “Gestures”. If you go this route, we would recommend restarting your iPad to be on the safe side of things.

Apple’s release of iPadOS is the biggest ever for iPad owners, as we inch closer to a full computer replacement. However, it’s extremely important for these smaller features to work so that users don’t end up getting frustrated and looking elsewhere.

We are hoping that Apple gets it together and fixes these bugs, or provides us with some documentation if there are new methods. Nonetheless, if you continue to have issues, sound off in the comments below and we will do our best to help you.