Beginning with the Apple Watch Series 3 in 2017, the iPhone maker began offering GPS + Cellular versions of its popular wearable device. In doing so, users were finally able to listen to music without their smartphone nearby.

Unfortunately, listening to music from your wrist comes with some challenges, whether or not you’re using a cellular connection. In this article, we offer some troubleshooting techniques for when the audio has stopped playing from your Apple Watch.

Not Just About Music

Before getting started, it’s important to note that listening to audio content is no longer limited to Apple’s Music app or the official Radio app. Spotify also now provides an official app for the wearable device. Additionally, thanks to the native Podcasts app, you can listen to this type of content too. In other words, these troubleshooting techniques aren’t necessarily exclusive to Apple’s Music app.

The most likely problem you’re experiencing with your Apple Watch when it comes to audio to being unable to hear the content. You need to pair a Bluetooth-enabled device to listen to content. Currently, you can’t listen to content directly from the wearable device.

Assuming you’ve already set up Bluetooth on your Apple Watch (see below), you should check your connection to see if there’s a problem.

To pair Bluetooth headphones or speakers for the first time to your Apple Watch:

You can now use your accessory to listen to audio from your Apple Watch.

In the following example, Audeara A-01 headphones are being paired for the first time:

It happens. You’re so caught up on wanting to listen to your favorite album or podcast episode from your Apple Watch, and you forget to check the volume. We’ve already put together a long list of troubleshooting tips on this issue. For the sake of this discussion where the focus is being unable to hear audio from Apple Music or a similar app, follow these steps:

Unless you’re using an Apple Watch Series 3 or Apple Watch Series 4 with GPS + Cellular, your music or podcasts must be synced with your iPhone. In doing so, you can then listen to this content without being near your smartphone. Without syncing, your content might not even be available on your wearable device.

For both the native Music and Podcasts app, you can select specific content to sync for your Apple Watch. After you sync, this content is available without your phone. 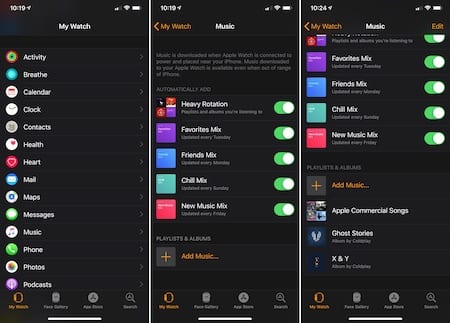 Note: If you’re next to your iPhone, links to your albums and playlists will get added to your Apple Watch immediately. However, they won’t sync and get downloaded to your wearable device until your watch is connected to power and placed near your iPhone.

If you are an Apple Watch GPS + Cellular owner, you can listen to the music immediately even when you’re not near your iPhone. However, even in this scenario, the music itself isn’t stored on the Apple Watch until it’s connected to power and placed near your smartphone.

The syncing of podcasts is a similar process. In this case, you can sync episodes of your favorite subscribed podcasts.

In the following example, two shows have been selected for syncing. In this case, six episodes are synchronized to the Apple Watch: 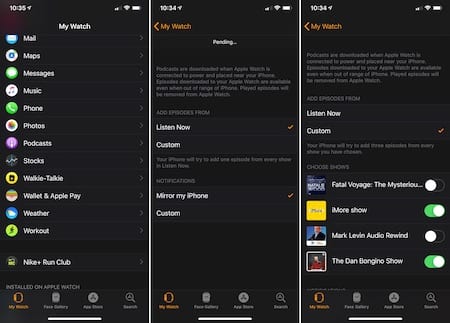 Note: Like with music, podcasts are only synced and downloaded after your Apple Watch is added to a power source and is near your iPhone.

Apps such as Spotify and the podcast-focused Overcast handle listening to content from Apple Watch differently. Check inside those and other third-party apps to see how they handle audio listening from the wearable device.

If you’re still running into audio problems on your Apple Watch, you can perform these steps to resolve your issues.

Perhaps the easiest solution is to restart the affected app.

You could also restart your Apple Watch.

Another suggestion is to delete the app and begin again. Remove the pesky app from the iPhone Home screen and then reinstall it from the App Store.

As a last resort, you should consider repairing your Apple Watch to your iPhone. Doing so is a relatively simple process and won’t involve losing data when done correctly.

Apple Watch and watchOS have been around for a few years now, and they are both becoming mature products. Because of this, audio problems on Apple Watch are becoming less prevalent, although issues still happen occasionally. If you’ve experienced audio problems with Apple Watch, we’d like to hear from you. Let us know below what steps you’ve taken to correct your problem.