You are here: Home / iPhone / iPhone Battery Chargers. Fast vs Trickle, Here’s What You Should Know

The battery found on your iOS device has been designed to use a combination of fast and trickle charging. In doing so, the company claims charging should be easier than ever before on mobile devices. Unfortunately, Apple continues to include an old school 5W USB-A charger with each iPhone rather than something that could provide a quicker charge. Because of this, many look to popular third-party chargers to get the job done.

Not all chargers are alike with some emphasizing fast charging and others trickle charging. In this article, you’ll learn more about the two. From there, we’ll highlight some popular third-party chargers.

With fast charging, the battery on your device charges quickly until it reaches 80 percent. Factors like temperature and whether you’re using the device during charging can affect how long it takes for the battery to reach that percentage. Limiting fast-charging to the 80 percent threshold is supposed to maximize the lifespan of your device battery while also cutting down on the amount of time it takes for the device to get a nearly full charge.

What about trickle charging? The final 20 percent of charging has been designed to ease the electrical current to extend the battery lifespan. Trickle charging also limits the possibility of fire or explosion since it allows the battery on your phone to avoid overheating.

Are there problems with fast charging your iPhone?

There are two issues here. First, many now believe that fast-charging will wear down a battery faster because of the amount of power being crammed into the battery. Because of this, some are now recommending charging your device overnight with a trickle charger (such as the one provided by Apple) and using a fast-charger during the day.

The reason? Many of these types of chargers now on the market use an intelligent design that only fast charge up to certain temperatures.

From there, charging slows down until the temperature drops to a more comfortable level, thereby extended the life of the battery.

Here are some chargers available now that we recommended for the reasons stated below:

Sticking With Apple for Trickle Charging 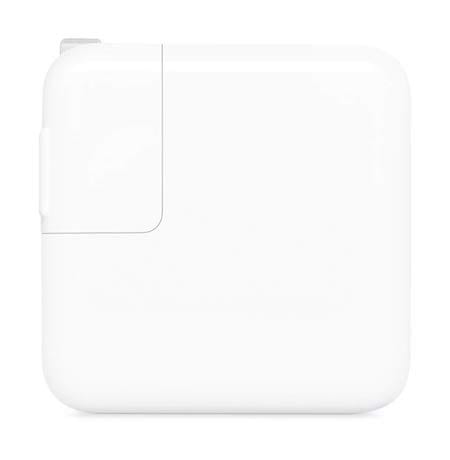 It’s embarrassing that Apple ships a 5W USB-A charger with each iPhone it sells, given just how powerful these smartphones have become (and how expensive they are to buy.) Recently, the rumor mill reported that Apple plans on continuing to ship a 5W charger with the 2019 iPhones. Luckily, there are plenty of native and third-party chargers you can purchase to speed things up.

In 2018, Apple elected to switch from Lightning to USB-C for its lineup of iPad Pro models. In doing so, it launched USB-C wall chargers that also work with iPhones. The only requirement is you must also purchase a USB‑C to Lightning Cable.

To date, Apple offers an 18W and 30W USB-C Power Adapter; both provide similar, but quicker charging, like the 5W charger.

Apple also offers smart battery cases for many of its iPhone models, including the iPhone 11 Series and X Series. These are best described as providing trickle charging.

You can find fast chargers that are battery packs and wall plugs. Here are a few we recommended:

Aukey makes some terrific charging products including the Ultra Compact Dual Port 2.4A Output and Foldable Plug. Priced at around $10, the plug uses adaptive charging for all 5V USB-powered devices at up to 2.4A.

The company also makes an impressive car charger that gets the job done.

What we like is that it includes a built-in safeguard to protect your devices against excessive current, overheating, and overcharging.

If you’re looking for a battery bank solution, consider the PowerCore Lite 10000 by Anker, which is a lightweight, compact 10000mAh portable charger that uses the company’s exclusive PowerIQ and VoltageBoast to provide a fast charge. This power bank can not only power your iPhone but also other phones such as Samsung ( For the holdouts in your family or friends circle).

If you’re looking for something with even more capacity, consider the USB C Power Bank RAVPower 26800mAh PD Portable Charger. The device can detect and adjust the charging current to obtain the fastest charging with ease.

The RAVPower 26800 portable charger is a little more expensive than the PowerCore Lite product but it has additional bells and whistles. First and foremost, you can use the RAVPower bank to charge up your MacBook. It can also charge your Nintendo Switch while you are playing, which is a pretty cool feature for gamers. There is also built-in functionality to power your portable Chromebook.

This unit only takes about 4 – 5 hours to get fully charged compared to 7 – 10 hours for some of the other popular battery banks. The RAVPower also includes a superior quality overcharge, short-circuit and current surge protection

To optimize your battery’s charge, Apple provides a running list of general performance tips. These include making sure your device is using the latest version of iOS to avoiding extreme ambient temperatures.

In recent years, Apple has also made it much easier to view battery usage information. At the center of this is a Battery Health tool that you can find in the Settings app under Battery.

An iPhone is expected to last for 500 or more cycles, which is about two years for the average consumer. At that point, the Lithium-ion battery has probably degraded to 80 percent of its capacity. You can see where your phone stands by going into the Settings app and tapping Battery. From there, select Battery Health.

In the example above, the phone’s maximum capacity is still at 100 percent.

More about the Battery Health Tool

Under the battery usage screen on your iOS device, you’ll find useful information to review for best practices. From this screen, for example, you can see a list of apps that are performing background activity. You can turn this off by visiting the Settings app under General > Background App Refresh.

Other messages you may see on this screen can include:

With each passing year, Apple does a better job of maximizing battery life on its mobile devices. At the same time, the company makes it easier for you to recognize just how much energy your device is using and why.

When it comes to fast-charging versus trickle-charging, Apple has designed a system that maximizes battery life while also taking into account our fast-moving lives which require that our devices are up and running most of the day.

What steps do you take to maximize the battery life of your iOS device? Let us know in the comments below.