You are here: Home / AirPods / How to fix red exclamation point errors on AirPods Pro

Seeing the AirPods Pro indicator on your iPhone or iPad glitch out? You wouldn’t be the only one — this appears to be an actual issue with the new headphones.

While the bug won’t end up breaking your new AirPods Pro, it can certainly be annoying. Here’s how to actually go about fixing it.

What the issue is

Basically, the bug causes an animation glitch in the AirPods Pro user interface on your iPhone or iPad.

It essentially causes one of the AirPods Pro indicators to become very glitchy and appear like it’s dancing around.

You’ll also see a red exclamation point next to the particular AirPod instead of the left or right indicator letter.

That isn’t necessarily a major issue, but it can keep you from knowing what your charge level is. It’s also fairly annoying and may keep your AirPods Pro from charging normally.

Just know that it probably isn’t the physical connection. All impacted users that we’ve seen were very clear that their AirPods Pro case was free of debris or dust.

From the looks of it, this does paper to be a fairly widespread issue. Because the impacted AirPods seem to function normally otherwise, it’s likely be tied to firmware or software — so it’s probably not a hardware problem.

It’s worth noting that this isn’t a necessarily new issue. Based on reports from users, both first- and second-generation AirPods had the same problem before a firmware update actually fixed it. 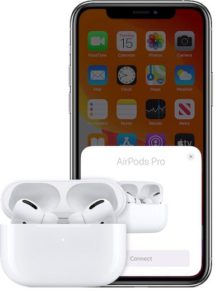 Here’s how to go about actually fixing the issue if it’s impacted your AirPods Pro.

First thing’s first: we recommend taking out the buggy AirPro Pro out of its case, waiting a few seconds and placing it back in. If the problem doesn’t persist, then you’re done.

If it keeps glitching out, then follow these steps to try and fix the issue.

Check for dust and debris

Earlier, we mentioned that many users running into this issue made sure that wasn’t any debris in their AirPods Pro case. But your own mileage may vary.

It’s worth checking the connection points inside your charging case to make sure there isn’t any dirt or other debris.

As always, it’s recommended that you start any troubleshooting attempt by Force Restarting your iPhone or iPad.

You’ll also want to make sure that your device’s software is up-to-date. iOS 13 has been a fairly buggy release, so a software fix may solve the problem.

It may be worth resetting your AirPods Pro using the physical button on the charging case. Here’s how.

From there, you’ll need to re-pair your AirPods Pro with the device that you’re using it with.

Alternatively, you can also try heading to the Bluetooth menu and forgetting your AirPods Pro from there.

Because AirPods Pro connect to your devices via Bluetooth, it may be worth resetting your iPhone’s or iPad’s network connectivity settings.

Keep in mind that you’ll need to actually re-pair your AirPods Pro with your device after resetting.

It appears that a firmware fix is the most surefire way to fix the problem. On the other hand, we don’t know if a current firmware update actually contains a bug fix. If it doesn’t, then a future firmware update probably will.

To update your AirPods Pro firmware, all you need to do is place both AirPods back in their case. Then, bring the case near your iPhone (with an internet connection).

You can also check what firmware you’re running by going to Settings —> General —> About —> Your AirPods Pro. For context, the current firmware version is 2B584.

Take your AirPods Pro to Apple

Of course, there’s always the slim possibility that your AirPods Pro or AirPods Pro case is actually defective.

If nothing else works and the problem persists, we recommend that you contact Apple Support. They’ll be able to help you repair or replace your headphones.

We hope that you were able to fix the issue on your new AirPods Pro. Please let us know in the comments below if you have any questions or concerns.